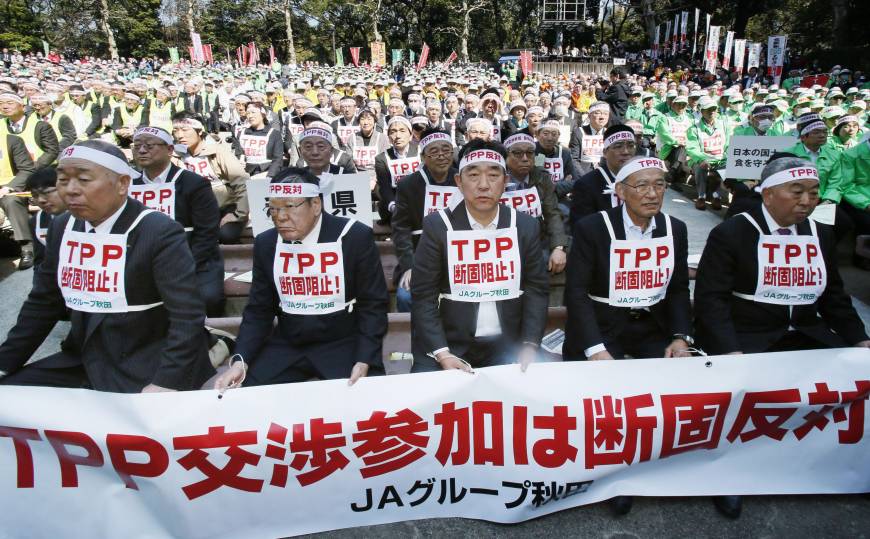 With eye on China, Japan refuses to ease TPP rules for new members By Masaya Kato and Kosuke Takeuchi

Initially, a small trade agreement signed by four Pacific Rim countries — Brunei, Chile, Singapore and New Zealand — the TPP-11 has suddenly turned into something of an exclusive club that nations are clamoring to get in. But next year’s chair of the trade pact, Japan, will be the gatekeeper upholding the strictest standards.

Formally known as the Comprehensive and Progressive Agreement for Trans-Pacific Partnership, the TPP-11 has recently attracted interest from a wide range of countries from the U.K., which has expressed its interest in joining next year, to Thailand and even global trade powerhouse China.

Beijing’s interest in particular has raised flags, given its growing influence over trade in the Asia-Pacific, as well as its stance on state-owned businesses and intellectual property.

"There are 11 members to the TPP, and new countries cannot just join without their approval," Japanese Prime Minister Yoshihide Suga said last week.

"There’s a big hurdle" for new membership, he said. "We’ll think about it strategically as we respond."

Japanese Foreign Minister Toshimitsu Motegi on Tuesday stressed that the TPP-11 sets high standards for regulations on e-commerce, intellectual property and state-owned enterprises. "We need to ensure that any new member is prepared to meet these standards," he said.

Sticking to the TPP-11’s existing standards will test China’s commitment to joining the deal. For example, the bloc bans special treatment for state-owned enterprises to ensure fair competition — partly a response to the global glut of steel and other products caused by aggressive capital investments by China’s state-owned manufacturers. The ban on forced source-code disclosures will also be a difficult pill for China to swallow.

"Japan must make it clear that it will not ease the TPP-11’s existing standards for China," said Yorizumi Watanabe, a professor at Japan’s Kansai University of International Studies. "Japan should approach the situation ready to turn China down if it cannot meet the standards."

Last month, 15 countries including Japan and China formed the Regional Comprehensive Economic Partnership, the world’s largest free trade agreement. To keep China from becoming the dominant rule-setter on trade, Japan hopes to expand the TPP-11 into an even larger trade bloc.

Still, Japan as chair does not plan to lower the TPP-11’s standards for the sake of expansion.

The Pacific pact has not had a new member since it came into force in December 2018. The U.K. is keen to join as the country seeks to bolster trade ties in the region following its departure from the European Union. Most TPP-11 members have welcomed the idea.

The response to Chinese President Xi Jinping’s comment last month that he will "favorably consider" joining the TPP-11 has been more mixed.

China is believed to be embracing the trade pact to bolster its economic clout in the Asia-Pacific while the U.S. is focused on its presidential transition. There is also speculation that China is trying to drive a wedge into Japan’s relations with the U.S.

South Korea is also considering joining the TPP-11, as is Taiwan, which faces growing tensions with Beijing regarding its status. Japan will need to cooperate with existing members to balance the different countries and regions interested in the pact.

When a country applies to join the TPP-11, the bloc forms a working group to determine whether that country can meet the pact’s rules. Applicants are encouraged to hold preliminary talks with TPP-11 members before formally applying as well.

Meanwhile, Japan hopes the U.S. will rejoin the TPP-11 under President-elect Joe Biden, and is reluctant to admit China to the bloc before this happens. But Biden, who supported the original trade deal during the Obama administration, heavily focused on domestic businesses during his campaign.

Kansai University’s Watanabe said the U.S. is unlikely to join the TPP-11 before its next midterm election in the fall 2022. "Japan’s job is setting the stage for the U.S. to return by signing up new members like the U.K. and Thailand," he said.