The Free Trade Agreement between Colombia and the United States should be rejected by the respective Congresses of both nations
25-Apr-2007 Mingas
Open letter to US Congress, signed by hundreds of Colombia organizations
Referendum on FTA unleashes political controversy in Costa Rica
20-Apr-2007 GRANMA
The call for a referendum in Costa Rica to decide on the future of a free trade agreement (FTA) with the United States has unleashed a hotly-debated controversy on the issue, which has marked political life here over the last three years, the AFP reports. 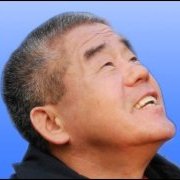 Huh Se-uk lives on in our struggle
18-Apr-2007 KoA
Huh Se-uk has died, but he lives on in our struggle, which continues. Inheriting his message and strength, we will defeat the Korea-US FTA.
Anti-FTA rally expected in Seoul in memory of dead protester
18-Apr-2007 Asia Pulse
A massive rally is expected in downtown Seoul Wednesday as thousands of protesters are to gather to pay tribute to a man who burnt himself to death in protest of free trade talks between South Korea and the United States. 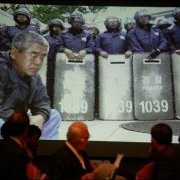 800 NGOs: "KorUS FTA is invalid!"
17-Apr-2007 Voiceofpeople
Korean Alliance against KorUS FTA concludes people’s protest should go on. They declared "KorUS FTA is Invalid" and decided to have nationwide strikes at the end of June, which is supposedly when the agreement will be signed. 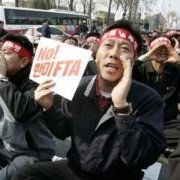 South Korean workers demand free trade deal with US be canceled
7-Apr-2007 IHT
Thousands of South Korean workers took to the streets of the capital Saturday, demanding that a just-concluded free trade agreement between their country and the United States be scrapped.
Anti-FTA rallies expected on weekend
6-Apr-2007
Several anti-FTA rallies are to take place in central Seoul this weekend, and clashes between protesters and police, and traffic jams are expected. 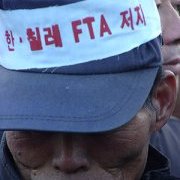 Farmer kills one, injures two over FTA
5-Apr-2007 Hankyoreh
Discouraged by the April 2 settlement of the US-Korea free trade agreement (FTA), a Korean farmer fired upon several others, killing one and injuring another two. 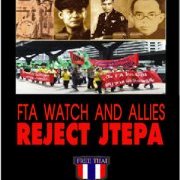 FTA Watch and allies reject JTEPA
3-Apr-2007 FTA Watch
Today is a day of the deepest shame for Thailand and the Tai people. The coup-installed government of Gen Surayuth Chulanon has decided to sign a free trade agreement with Japan. This is in spite of the nation-wide impact that this agreement will have on the environment, biological resources, farmers, patients, small businesses and the majority consumers of health services. We insist that JTEPA as signed by the government today is null and void. We reject it and refute any obligations it places on the Thai people.
FTA protestor who immolated himself in serious condition
3-Apr-2007 Hankyoreh
Heo Se-ok, who set himself on fire on April 1 in protest of the Korean government’s moves to sign a free trade agreement (FTA) with the US, still remains in serious condition with burns over 63 percent of body, hospital officials said. The Korean Confederation of Trade Unions issued a statement holding the government responsible for Heo’s taking of extreme measures to protest the situation. 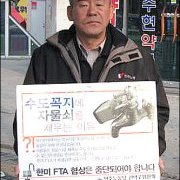 Self burning against Kor-US FTA
3-Apr-2007 Voiceofpeople
A taxi driver Heo Seuk, 54 years old man, burnned himself and left his last speech, "Give up the KorUS FTA". He was in the fire for 2 minutes and the ambulance arrived 5 minutes later. Fortunately he is alive now. But his doctor Lee Jeongsub explained that the probability that he would survive is 20 30 percent.
Labor groups boycott S Korea-US FTA deal
2-Apr-2007 Yonhap
Korean labor groups voiced their strong opposition to the just-reached deal between South Korea and the United States to effectively dismantle their tariff barriers. The groups vowed to launch a campaign to nullify the free trade agreement deal (FTA) and even threatened to attempt to oust President Roh Moo-hyun. 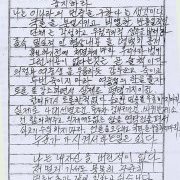 KCTU union member attempting self-immolation as an act of resistance KORUS FTA!
2-Apr-2007 KCTU
Around 3:55 pm, April 1st 2007, Bro. Heo Se-Wook (54), a union member of KCTU, was attempting to suicide by self-immolation as an act of resistance against the Korea-US FTA negotiation. His health condition is very serious and receiving an emergency medical treatment at the Hangang Scared Heart Hospital. We need your solidarity and support.
Jews for Boycotting Israeli Goods - A spearheading new initiative
2-Apr-2007 MMN
Members of J-BIG have joined the wider campaign for abolishing the special trade and economic benefits granted to Israel as part of its trade agreement with the European Union. Indeed a significant number of British MPs appear to support this campaign.
S Korean protester sets himself ablaze outside FTA talks
2-Apr-2007 Daily News and Analysis India
A South Korean protester set himself on fire on Sunday outside a Seoul hotel where talks on a free trade pact with the United States are in their final hours, witnesses and hospital officials said.
What’s the rush to ink FTA with Japan?
2-Apr-2007 Bangkok Post
Critics of tomorrow’s signing say the interim Thai government has broken promises and failed to reveal details of the pact, but the biggest question they have is why Surayud is in such a hurry 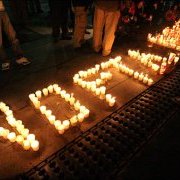 S Korean man attempts self-immolation against FTA with US
1-Apr-2007 Yonhap
A South Korean man set himself afire on Sunday to dramatize his opposition to a proposed free trade agreement between his country and the United States, as negotiations were coming to a close, with an extended deadline only hours away. The 56-year-old taxi driver, identified only by his surname Heo, was in serious condition at a hospital after the protest 20 meters from the front gate of a heavily guarded Seoul hotel where the final talks were under way.
Activists celebrate as Malaysia-US FTA deadline expires
1-Apr-2007 AFP
Malaysian opponents of a free-trade deal with the United States celebrated Saturday after the countries missed an end-of-the-month deadline to fast-track an agreement.
Letter from Japanese farmers to Prime Minister of Thailand
1-Apr-2007 Via Campesina
From our standpoint, upcoming Economic Partnership Agreement (EPA) between Thailand and Japan involves big problems which will bring misery of people in both countries. 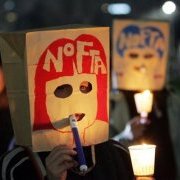