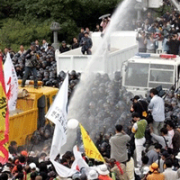 Militant protests greet Korea-US FTA negotiations
28-Oct-2006 Party for Socialism and Liberation
Militant protests have taken place daily during the fourth round of negotiations for the Korea-U.S. Free Trade Agreement.
Anti-FTA protesters clash with riot police in Jeju
25-Oct-2006 Hankyoreh
Korean riot police, using water cannons and clubs, on Tuesday dispersed hundreds of anti-globalization protesters trying to disrupt free trade talks between South Korea and the US, witnesses said.
About 10,000 farmers protest over US-S Korea trade talks
24-Oct-2006 All Headline News
In the wake of protests from thousands of farm activists and unionists, South Korean and U.S. negotiators resumed controversial free-trade talks on Monday, on the resort island of Cheju. 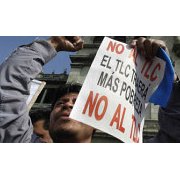 Costa Rica and the shout of the excluded
24-Oct-2006 Prensa Latina
The Costa Rican people are in the streets and on a general strike Monday and Tuesday to challenge the free trade agreement with the United States, which President Oscar Arias has approved to accelerate.
South Korean protesters blast US over free trade, North Korea
23-Oct-2006 IHT
South Koreans took to the streets Sunday against a proposed free-trade agreement with the United States, a day before the start of a new round of negotiations that have made few breakthroughs and face a looming deadline.
Police to dispatch 10,000 to Cheju for FTA talks
19-Oct-2006 Korea Times
The Korean National Police Agency has stepped up security for the nation’s free trade talks with the United States, sending 10,000 police officers to fend off protesters at the meeting venue on Cheju Island.
Costa Rica questions US trade pact
19-Oct-2006 Prensa Latina
Costa Rican unions and social organizations confirmed their participation in a national strike against the Free Trade Agreement (FTA) with the United States, currently being evaluated in Congress.
Costa Rican sectors battle US trade
17-Oct-2006 Prensa Latina
The withdrawal of the Free Trade Agreement (FTA) with the United States and development of alternatives are some of the actions proposed by deputies, social organizations and sectors that oppose to the ratification of that agreement on Monday.
S. Korean farmers, activists plan anti-FTA protests next week
16-Oct-2006 Asia Pulse
More than 3,000 South Korean farmers and activists plan to hold peaceful demonstrations next week to protest against a fourth round of free trade talks with the United States, organizers said Monday.
Aids activists bring patent-drug fight to US
10-Oct-2006 The Nation
The Thai Network of People Living with HIV/Aids will launch the country’s first campaign abroad against the Thai-US free-trade agreement (FTA) from tomorrow to October 29 in US cities, including San Francisco, New York, Washington and Chicago.
Minimum wage free trade deal will meet resistance
9-Oct-2006
Maritime Union of New Zealand General Secretary Trevor Hanson says the Union will resist any attempt to undermine wages and conditions through short term casual workers imported under free trade deals.
EPAs negotiations: Civil society calls for caution
3-Oct-2006
Civil society organisations have called for caution as Nigeria, the Economic Community of West African States(ECOWAS) and other African, Caribbean and Pacific(ACP) countries begin the second phase of negotiations with the European Union on the proposed Economic Partnership Agreement(EPAs).
Children of the WTO
28-Sep-2006
World Trade Organization talks collapsed in July 2006 over strong internal disagreements on agricultural policy. While social activists throughout the world cheered, policy-makers in the U.S. and Canada started aggressively pursuing bilateral trade accords or Free Trade Agreements [FTAs].
Mauritian MLAs asked to stop the process of EPA
28-Sep-2006
A Mauritian political party called Rezistans ek Alternativ (RA) has asked local MLAs to help in stopping the process of Economic Partnership Agreements (EPA) which, according to its members, Mauritius and fourteen other African countries have agreed to negotiate with the European Union, without realising the implication of such an agreement.
10 reasons to challenge the Pacific EPA
28-Sep-2006
Do the Pacific Islands’ negotiators genuinely hope they can negotiate a beneficial Economic Partnership Agreement with the European Union or are they simply going through the motions and doing what is required of them under the Cotonou Agreement 2000? In the secretive chess game of trade negotiations it is impossible to know.
«EFTA FTAs may have serious consequences on Thailand and Indonesia» tell civil society representatives to EFTA governments
27-Sep-2006
Lobby travel from Indonesian and Thai civil society in EFTA countries (Switzerland, Liechtenstein, Oslo)
Development compatibility of EPAS - A critical civil society review of the EU-ACP negotiations on Regional Free Trade Agreements
27-Sep-2006 WEED
The conference focuses on three particular problem areas of EPAs. Are EPAs endangering food sovereignty and rural development of mostly agrarian oriented ACP states? Are EPAs in their current form undermining autonomous initiatives of regional integration? What effects are to be expected from a broad liberalisation agenda including the so called "new issues” of investments, competition and public procurement?
SOMO Briefing Paper: EPA negotiations do not promote the right investment policies in Africa
26-Sep-2006
The EU strongly advocates that attracting more foreign investment is a solution to African development problems and that African countries therefore need to include strict investment liberalisation measures in EPAs.
SOMO Briefing Paper: The risks and dangers of liberalisation of services in Africa under EPAs
26-Sep-2006
The European Union (EU) is negotiating with African, Caribbean and Pacific (ACP) countries for a new free trade agreement: the Economic Partnership Agreements (EPAs). The liberalisation of services and therefore opening the market for foreign investors is part of these negotiations.
USA: Labor & textile groups demand punitive measures against Jordan
25-Sep-2006 Fibre2Fashion
The US Trade Representative has been urged by the largest US labor organization and textile group to file a complaint against Jordan for its failure to check companies from exploiting their laborers and subsequently cheating them on wages. Since the US-Jordan FTA was signed between the two nations in December 2001, this is the first time any US business group has come together with labor demanding action under the treaty.
0 | ... | 1800 | 1820 | 1840 | 1860 | 1880 | 1900 | 1920 | 1940 | 1960 | ... | 2020
Subscribe to bilaterals.org weekly