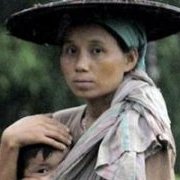 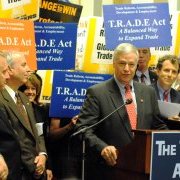 106 members of Congress introduce TRADE Act, promote a better trade model
25-Jun-2009 Mike Michaud
Endorsed by more than a dozen fair trade groups, the TRADE Act would revamp US trade policy.
Goldcorp loses bid for $50 mln NAFTA compensation
11-Jun-2009 Reuters
A unit of Goldcorp has lost a bid to get $50 million in compensation after a US trade tribunal rejected claims the gold miner’s operations were hampered by environmental regulations 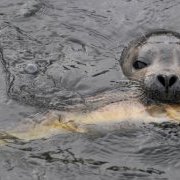 Cracks appear in advance of Canada-EU trade talks launched
6-May-2009 Embassy
European officials say Canada promised everything was on the table, but a senior official says that’s not the case.
US, Peru review environmental advances in FTA
23-Apr-2009 AFP
US and Peruvian officials met recently to see how the environmental clauses of the free trade agreement signed between Lima and Washington were being implemented, the office of the US Trade Representative said Wednesday.
Will Dow challenge Quebec pesticide law?
3-Apr-2009
Dow AgroSciences is mulling over a NAFTA challenge to Quebec’s law banning the cosmetic use of pesticides, setting a spotlight on one of the most controversial clauses of the trade agreement among Canada, the United States and Mexico.
US lawmaker details obstacles to free trade deals
12-Mar-2009 Reuters
Panama, Colombia and South Korea need to resolve a number of outstanding concerns before Congress will approve free trade pacts with each of those countries, a US lawmaker said on Wednesday.
Add human rights to FTA talks: EU
4-Mar-2009 Business Standard
A draft report prepared by Members of the European Parliament could potentially derail negotiations between India and the European Union on a Comprehensive Economic Partnership Agreement involving duty-free trade of goods, services and investment. The report calls for the inclusion of human rights and democracy issues in the CEPA talks and an international investigation into “extra judicial killings” in Jammu & Kashmir.
Undercutting Africa
3-Feb-2009 TNI
Why EPAs threaten the world’s forests and forest peoples
Ramming the matter home: Peru-US FTA rushed, diluted and finagled
29-Jan-2009 COHA
Two weeks ago, as the Peruvian Congress buoyantly rushed to amend labor, health, and environmental requirements in order to implement the long pending bilateral Free Trade Agreement (FTA) with the US, former President George W. Bush and Peruvian President Alan García could not afford any further delays. As Barack Obama moved into the White House, it was clear that the Bush and García Administrations’ priority was to declare the FTA in effect regardless of what had been previously negotiated and amended in the halls of the Peruvian Congress.
Crisis may lead to more non-tariff barriers
15-Jan-2009 The Nation
Many of Thailand’s trading partners are expected to implement non-tariff barriers this year to shield their markets from a flood of imports as a looming global recession prompts governments to negotiate free-trade pacts.
Free Trade Opens Environmental Window
1-Nov-2008
Legislative decree 1090, which modifies Peru’s forest policy, is worrying U.S. trade authorities because it contravenes environmental clauses of the Free Trade Agreement (FTA) that is to enter force between the two countries in January 2009.
Trade pact could lead to waste dumps
6-Oct-2008 Bangkok Post
The Asean-Japan Comprehensive Economic Partnership (AJCEP) agreement, which goes before Thai parliament today, will make Thailand a waste-dumping site for Japan, critics warn.
Don’t use trade for resolving non-trade issues: Kamal Nath
29-Sep-2008 Economic Times
"Increasingly we hear about proposals in the EU for levy of carbon tax on imports into EU, ban on imports on allegations of labour law violations and use of child labour etc. Any effort to combine trade with other social issues would prove to be disastrous for bilateral trade" says India’s commerce minister about the EU-India FTA.
Reject JPEPA, leaders of 66 NGOs appeal
14-Aug-2008 PDI
In a letter to Philippine Senate President Manuel Villar, 66 NGO leaders from around the world joined calls from local NGOs urging the Senate not to approve what they describe as a “flawed treaty” that promotes trade of toxic wastes.
Chevron lobbies White House to pressure Ecuador to stop $12bin Amazon pollution lawsuit
10-Aug-2008 DN!
Chevron is being accused of promoting geopolitical blackmail in its efforts to stave off a lawsuit accusing it of contaminating the Ecuadorian rain forest. Nearly 30,000 Amazon residents are seeking $12 billion from Chevron for dumping billions of gallons of toxic oil waste. According to Newsweek, the oil giant is urging the Bush administration to yank special trade preferences for Ecuador if the country’s government doesn’t force the Amazon residents to drop the case.
Colombia deal side agreements under microscope
6-Aug-2008 Embassy Magazine
With the Canada-Colombia deal done, but the text still kept secret, some say that the provisions on labour and the environment at least establish a record of commitment, while others say that without enforceable complaint mechanisms the side agreements amount to little more than lip service.
Official: Mexico open to new NAFTA talks
2-Aug-2008 Chicago Tribune
The Mexican government dismisses talk of disbanding NAFTA as politics, the country’s economy minister said Friday, but it would back the idea of a new round of North American trade talks, with the aim of including issues such as the environment and labor.
A call for the Senate to reject the Japan-Philippines Economic Partnership Agreement (JPEPA)
31-Jul-2008 Hopeful
The undersigned ask the Philippine Senate to fulfill its role as check and balance to the Executive branch of government, to do right by the Filipino people and reject this infirm, lopsided, unlawful and unconstitutional treaty.
US, China sign energy, environment accord
11-Jul-2008 CalTradeReport
The US and China have signed a framework for an agreement to define cooperation on energy and environmental issues and will soon launch negotiations to reach a comprehensive investment and financial services treaty.
0 | ... | 340 | 360 | 380 | 400 | 420 | 440 | 460 | 480 | 500 | ... | 520
Subscribe to bilaterals.org weekly