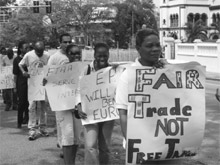 Caribbean governments have already declared their support for the Economic Partnership Agreement (EPA). Cariforum countries are part of the African, Caribbean and Pacific (ACP) grouping and regional negotiations have gone as far as the initialing stage. Despite that, various regional organizations continue to stand firm that the EPA’s hold more benefits for the Europeans than Cariforum countries, which include CARICOM and the Dominican Republic.

On Thursday June 12, organizations from around the region staged a protest in front of White Hall, the prime ministers office in Queens Park Savanna, Port of Spain. A cabinet meeting was scheduled for the same day and organizations present included representatives from the Oil Field Workers Union in Trinidad, (OWTO) the Public Service Association, Waterfield Farmers Welfare Association, the Windward Island Farmers Association, Guyana Rice Producers Association and the Trinidad Youth Council.

The mob standing on the side walk were impossible to miss but the only indication that the prime minister was aware of their presence was a wave as he was driven to his cabinet meeting. Other ministers drove past without even a passing glance at the demonstrators who lined the streets with placards. One farmer told the STAR he was protesting because he felt the EPA would only give the Europeans the legal right to continue slavery.

Shantal Munro Knight, a senior program officer from the Caribbean Policy Development Centre said although they were protesting outside White Hall and speaking directly to the prime minister of Trinidad and Tobago, the message also had to go to regional heads who had to work in the interests of the people. "We’re really testing our democracy," said Shantal Knight in a press conference with the media. "Democracy is supposed to be about the people and for the people. If it’s supposed to be all those things and the people of the Caribbean are saying, ‘We are not satisfied with the agreement’ that means it has to be stopped!"

The senior program officer said the agreement had already been initialed but not many people knew or understood what the agreement contained. "Farmers don’t know what’s happening in negotiations, entertainers didn’t know what was happening. How is something supposed to be in [our] interest if [we] don’t know what it’s about? Governments have been saying they’re having a review, well what is the review? We are of the firm conviction that this process is going to be detrimental and we are saying right now that it has to stop. Our governments need to protect our interests."

The Federation of Independent Trade Unions and NGO’s, (FITUN) were the host of the rally in collaboration with the Caribbean Policy Development Centre, Christian Aid and Oxfam. FITUN’s president David Abdulah, said the prime minister was not taking their position seriously because as far as he was concerned, the EPA’s were "the best thing since sliced bread."

That’s the position of the government, they believe the Trinidad and Tobago economy is globally competitive," said Abdulah. "We are in ammonium, methanol, steel and a few other products but those would not be impacted upon one way or the other by the EPA. Those are very high capital intensive projects. Trinidad’s manufacturing center is the largest in CARICOM but manufacturers are going to be under very severe pressure as a result of the EPA and there is the possibility of major job losses. We’re protesting outside cabinet meeting because our cabinet does not only decide for Trinidad and Tobago."

Cornelius Lynch, St Lucian representative for the National Fair Trade Association was among demonstrators on Thursday. "I want to say this is a very serious moment for us in St Lucia. I represent an organization in St Lucia which consists of about 1500 farmers and you would go to any of those farmers and ask them what is the EPA and some of them just won’t know what it means," he said. "We want the government, those persons we have elected to represent us to come out and tell us what is happening. The farmers and the poor people out there, who will be directly affected, know nothing about what is happening. We do not want hand outs, we want to do things for ourselves."

Later in the day the protest moved to the European Union office in Trinidad which was walking distance away from the prime ministers office. A representative from the European Union came out to say the counselor and charge d‘Affares was out of the island, "otherwise he would have met with the delegation." A representative from the US Embassy also met with the delegation. The protest was only a prelude to intense campaigning this week to stop EPA negotiations. A regional civil society conference on the EPA was held at the University of the West Indies International Relations Department in St Augustine, Trinidad on Friday June 13.