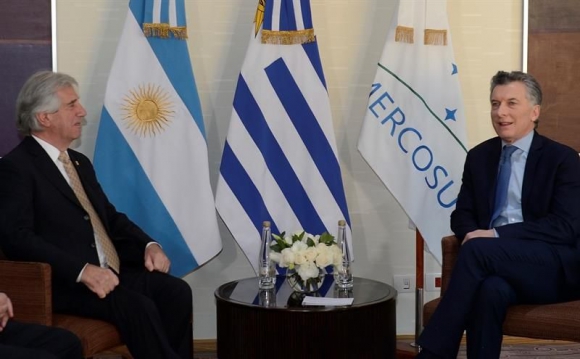 BUENOS AIRES – Argentine President Mauricio Macri and Uruguayan counterpart Tabare Vazquez agreed on Tuesday that the Mercosur bloc should pursue trade accords not only with the European Union, but also with Asian countries and Canada.

“We have a grand agenda for working together, always thinking about how we can help our people make progress,” Macri said with Uruguayan counterpart Tabare Vazquez at his side during the opening of Uruguay’s new embassy in Buenos Aires.

He pointed to a “huge challenge ahead” as Mercosur – Argentina, Brazil, Paraguay, Uruguay – continues to seek a free trade agreement with the European Union, a process that has already dragged on for years.

“And we want to do a Mercosur-Japan, Mercosur-(South) Korea, Canada, China,” Macri said, noting Uruguay’s efforts toward economic integration with the Asian giant.

“We also believe that (China) is a potential strategic ally for all of us,” the Argentine leader said.

Macri’s words came a day after Uruguay assumed the rotating presidency of Mercosur during a summit in Asuncion.

Speaking in the Paraguayan capital, Vazquez said that Mercosur would not sacrifice fundamental interests to achieve a deal with the EU and vowed not to waste time in “eternal negotiations.”

Vazquez also said that Mercosur should not ignore the possibility of pursuing trade pacts with China, Russia, Japan, and the Eurasian Economic Union, among other potential partners.