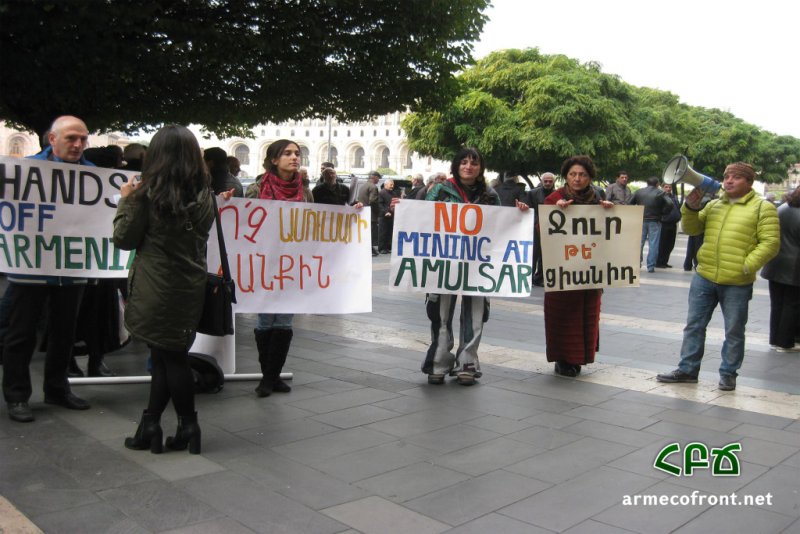 YEREVAN— The Administrative Court of the Republic of Armenia passed a ruling last week declaring the blockade of the Amulsar mining site by environmental protesters an illegal act of trespassing on private property.

This judgement comes almost six months after Lydian Armenia CJSC, the fully-owned subsidiary of Lydian International Inc. filed an injunction against the Police Force of the Republic of Armenia for failing to disperse protesters from the property. The court ruled against the Police, ordering them to refund the 4000 AMD ($8.50) administrative filing fee to the mining giant, after it became clear that officers had ignored written requests by the mine’s operators to remove mobile cabins installed on company land by the protesters. Police have one month to clear the property of these tents and vehicles.

The Armenian Environmental Front (AEF), the leading environmentalist collective opposing the mining project downplayed the significance of the ruling. The group accused the firm of misleading the public as well as investors, stating that the ruling only applies to the campers and tents encroaching onto the company’s plot, which they insist is less than two meters (6.5 feet) deep. The AEF also disputes the passage from Lydian’s statement that the ruling assures free access to the Amulsar mining site, citing the absence of any order to dismantle the roadblocks on the public path leading to the property.

The sort of clear wording expected by protesters may not be necessary, however. Citing Article 11 (1) of the European Convention on Human Rights, the Court ruled that the protesters’ right to freedom of assembly guaranteed by Article 29 of the Armenian Constitution is not absolute and does not extend to private property without the consent of the legitimate owner. In using this wording, the ruling clarifies any potential challenges to the company’s legal ownership of the plot.

Khoren Nasibyan Esq., head of Lydian Armenia’s legal department, refuted the AEF’s interpretation on Tuesday, noting that the wording in the ruling was very clear. “The order does not only include the trailers installed by the activists in Lydian territory, but also refers to the activists blocking the roads of Amulsar preventing Lydian to exercise its property rights, which implies the access to Amulsar,” he said.

Furthermore, the blocking of public roads without a permit is already considered an unlawful act under Section 9, Article 246 of Armenia’s Criminal Code. Chapter 21, Article 109 of the Land Act also guarantees the right of access to private property. This fact is specifically referenced in the court ruling which states that the blockade “breaches the right of the company to the inviolability of its property, including the right to use the property without any obstacles.”

Lydian CEO João Carrêlo hailed the court’s decision in an online statement. “This is a long overdue step that we hope will become an important milestone towards the abolishment of unlawfulness and discrimination that Lydian has been facing since June 2018.” The executive also clarified that the firm respects individuals’ right to free expression, so long as it doesn’t infringe upon the rights of other lawful actors.

The dispute over the Amulsar mining project dates back to 2013, when environmentalist groups voiced concerns that the operation might contaminate the water supply to Lake Sevan and cause irreparable damage to the region’s fragile ecosystem. The Anglo-Canadian mining consortium dismissed the concerns, pointing to an independently-conducted audit which they say confirms the mine’s commitment to the highest international environmental standards.

The deadlock entered a new phase in June of last year when 100 protesters set up barricades to block access to the site. With construction coming to a standstill, the company says it laid off almost 1300 workers (464 of whom hailing from surrounding villages).

One of the main complaints from protesters was regarding legitimacy of the government approval on the project. Previous environmental assessments had long received government approval before construction of the mine began, but those agreements were made prior to Armenia’s Velvet Revolution, when the government switched hands nearly overnight—from a corrupt leadership to a more democratic one led by the movement’s popular spokesperson, Nikol Pashinyan. To appease protesters’ demands for reconsideration of deals made under the ousted Republican Party of Armenia, last month, the Government of Armenia announced the allocation of $370 million in State funds for a third environmental audit, which would review the already-existing Environmental and Social Impact Assessment (ESIA) and Environmental Impact Assessment (EIA). Earth Link & Advanced Resources Development (ELARD), the consultancy firm contracted to conduct the audit, expects to release results within 12 weeks.

It doesn’t help activists’ cause that the extractive industries comprise a significant portion of Armenia’s economy. Lydian International alone made up 53 percent of all cashflow into the country last year with its $400 million project. The mining giant is also the country’s single largest taxpayer, contributing $185 million a year to State coffers. In response to the backlash, the behemoth froze future investment plans. (Upon the court’s decision, Lydian stock price, listed on the Toronto Stock Exchange (TSX), shot up 56 percent to C$0.18.)

Prime Minister Nikol Pashinyan, for his part, has been reluctant to intervene in the dispute until after the Yerevan municipal and parliamentary elections, both key votes for his revolutionary cabinet. His government has come under pressure from both the British and American governments to solve the matter within the confines of the rule of law. Pashinyan has called for a resolution on the basis of facts, not emotions.

Lydian’s statement reiterated that it “fully reserves all rights and remedies to address any disputes under Armenian and international law.” The company’s Canadian and British subsidiaries have already announced their intention to initiate arbitration proceedings against Armenia in accordance with bilateral agreements if the matter is not resolved. Experts warn that case could potentially harm Armenia’s image as an investment-friendly country.

Activists in the meantime have vowed to continue their protest and plan to appeal the court’s decision within the month.