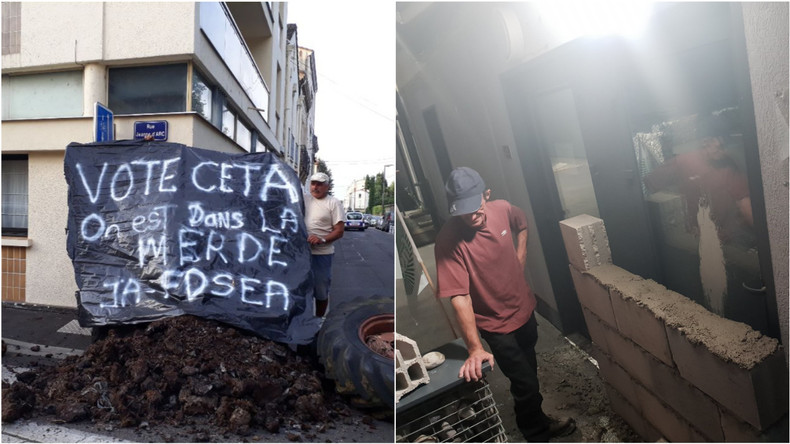 The offices of two lawmakers from Emmanuel Macron’s LaREM party in Toulouse in the southwest of the country have been vandalised by famers inToulouse, just the latest in a number of incidents over the past week. In the case of Monique Iborra, tonnes of manure were dropped outside her offices, while the office of Corinne Vignon was blocked using concrete blocks. Manure was also dumped outside police headquarters.

According to the farmers of the FDSEA farmers union, they had invited the ten deputies of Haute-Garonne region for a debate on the CETA agreement.

However, none of the deputies responded and, according to Christian Mazas, head of the regional branch of the union, they decided to visit the deputies.

In an interview with the French radio station Europe 1, Mazas said the position of the lawmakers does not make sense.

"We are basically saying to [Corinne Vignon] that if she is not going to listen to us, there is no point in her continuing as an elected representative,” he said.

He also said the action aimed to point out the inconsistencies of elected officials: "This member, like others, voted for Ceta, whereas a few months ago, at the meeting of the [government committee on food production], these are the same people who voted for farmers in France to raise their its level of production arguing that French farmers have higher [production] standards to meet than in other countries.”

Earlier this week, twenty MPs from the LaREM party signed a tribune to denounce a spate of attacks on the constituency offices of MPs.

Several MPs were also the subject of abuse on Twitter after having voted in favour of the accord.

“We are becoming used to the intolerable,” warned the MPs on the website of French radio station Franceinfo. “Our constituency offices are boarded up or smashed up, MPs are insulted on social media because they voted in a certain way, some have had their homes targeted or even set alight."

The constituency offices of a group of members of parliament for the ruling LaREM party have been targeted in recent days following the vote in parliament in favour of the controversial EU-Canada trade deal, known as Ceta.

Anti-Ceta graffiti was daubed on the walls of some constituency offices and straw and eggs as well as rotten fish were thrown at the facades.

France’s lower house of parliament approved the huge EU-Canada trade deal at the end of July after a heated debate about its environmental impact and a rebellion by some ruling party members.

In a vote in the National Assembly, 266 members approved the deal which has been championed by centrist President Emmanuel Macron, while 213 voted against it, including left-wingers and the far-right.

The Comprehensive Economic and Trade Agreement (CETA) took effect on a preliminary basis in September 2017, but it must also be approved by each of the European Union’s member states to become permanent.

The legislation in France will now head to Senate before being signed into law by Macron at a later date.