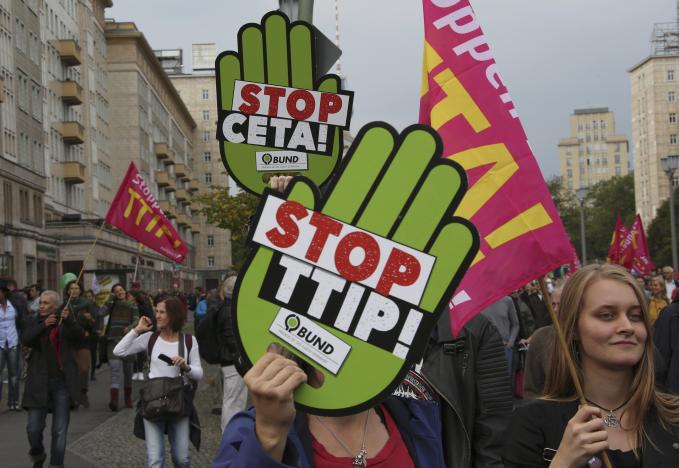 Hundreds of thousands march in Germany against TTIP, CETA

Hundreds of thousands took to city streets across Germany on Saturday as they marched against a pair of corporate-backed trade deals they say will undermine democracy, attack workers and local economies, and accelerate the threats posed by corporate hegemony and global warming.

Taking aim at both the Transatlantic Trade and Investment Partnership (TTIP) and the Comprehensive Economic and Trade Agreement (CETA), European Union deals with the United States and Canada respectively, opponents say the agreements are not really concerned with expanding trade but rather increasing corporate power.

With large rallies in Berlin, Hamburg, Cologne, Leipzig, Frankfurt, and other cities – the crowds have been estimated at anywhere from 250,000 to 320,000 nationwide.

Despite the precarious negotiations, the people in the streets on Saturday appear unwilling to take any chances. As those who spoke with the BBC indicated:

"I want us to get rid of TTIP and for European social and environmental standards to be respected, maintained and improved," said Peter Clausing in Berlin.

Many demonstrators think the deal would lead to exploitation of people by businesses on both sides of the Atlantic.

"It will be the enterprises and banks that will have power over people worldwide," said Tobias Kuhn. "That is a no-go. People need to know that and we will protest until there’s no chance of that happening anymore."