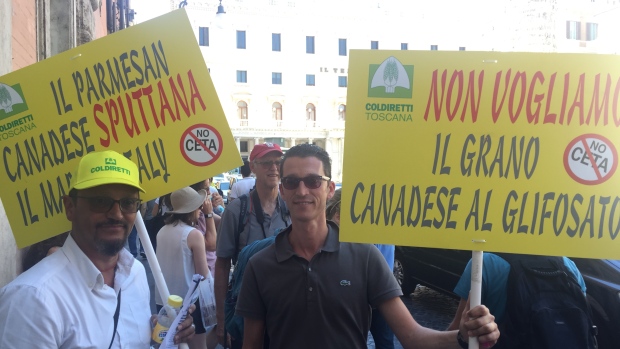 They came from up and down Italy, setting up their protest headquarters just a few dozen cobblestone steps from the Italian parliament in Rome.

"Canadian Parmesan Ruins the Reputation of Made in Italy," read one sign in Wednesday’s protest.

"No Meat with Hormones from Canada," read another.

"We’re concerned about health, because Canada uses chemicals that are banned in Europe," said Patrizia Puppo, a farmer from the northern Italian region of Friuli. "And also about the big size of Canadian farms. Italy has small ones, with high productivity, but it’s hard to compete."

Mobilized by the largest agricultural organization in Europe, Italy’s Coldiretti, the farmers converged to turn up the heat on Italian politicians faced with ratifying the controversial Canada-EU Comprehensive Economic and Trade Agreement, or CETA.

Of chief concern for Coldiretti these days is Canadian durum wheat.

Italy grows just 60 per cent of the durum it needs to meet the demand in this pasta-loving nation. Imports from around the world fill the gap, and Canada’s durum has a high protein content that makes it especially sought-after by Italian millers and pasta producers.

"We’re harvesting our new wheat crop, and at the same time ships of wheat from Canada and other countries are arriving — and the price of durum wheat is falling because there is more in the market than the demand of pasta producers," says Coldiretti president Roberto Moncalvo.

The issue came to a head last month, when for the second time in two years a shipload of 50,000 tonnes of Canadian durum wheat was seized in the port of Bari.

Coldiretti says it alerted a branch of the Italian armed forces, who found it contained high levels of toxicity. A few days later, another inspection by a certified laboratory found toxicity levels to be well within safety limits and the shipment was released — but not before articles appeared in Italian papers with headlines about "contaminated" Canadian wheat.

Italy’s association of flour millers, Italmopa, denounced the incident, calling it part of a campaign of "demonization" of foreign wheat, in which Canada undergoes rigorous health inspections before being shipped.

"Coldiretti has decided to launch a war attacking the Italian milling industry in a deliberate move to confuse the consumer," says Cosimo De Sortis, Italmopa’s president. "This is clearly an attempt to damage the Italian flour and pasta industry using the most hateful of means, such as alerting authorities to inspect the contents of the ship."

Moncalvo says the move was not a protectionist ploy but one made out of real health concerns, citing Canadian wheat farmers’ use of glyphosate — a widely used herbicide some argue is potentially carcinogenic, something its maker Monsanto disputes.

Italian health authorities have placed tight restrictions on glyphosate and it is banned from use on wheat.

A main point of contention over CETA is the difference in food safety standards.

Europe follows a precautionary principle, whereby anything that might cause harm to consumers should be banned until proven safe — a standard the trade agreement threatens, says Moncalvo.

He says the same concern propelled his organization to lobby Italy to request permission from the European Commission to label all pasta packages with the country origin of the wheat inside. A decision is expected in mid-August.

"It would fulfil two goals," says Moncalvo. "Transparency for consumers, and a correct demand of durum wheat from Italy, which at this moment is the most sustainable way in the world."

But the flour and pasta producers cry foul. They say the labelling request is a blatant marketing manoeuvre to influence consumers to buy Italian.

De Sortis says foreign wheat is perfectly safe and points out that, in some years, Italian durum wheat, with its lower protein content, can’t be made into pasta without the addition of higher-protein wheat from elsewhere.

The millers’ association says if Europe approves Italy’s pasta labelling request, costs for them will rise by 30 per cent, due to the need for additional silos to store wheat from different origins and a more complicated management system of mills and quality inspection.

"It’s a protectionist move that goes against free-trade principals of the EU," says De Sortis. "But above all, it’s a risk of creating a disincentive for Italian producers to produce quality pasta."

Canadian exporters and farmers also oppose the move, worrying it would lower prices and raise the cost of transporting wheat to Italy. The Mediterranean country is Canada’s second-largest foreign buyer of durum wheat, with yearly sales adding up to about $250 million, based on average export volumes and International Grains Council price data. Canada currently pays 95 Euros ($140) per tonne of wheat in EU tariffs, which would be eliminated with CETA.

But Moncalvo says the Italian farmers’ association, which has requested similar labelling for milk and other products, is confident Europe will back it.

"Canada can continue to export durum wheat in Italy," he says, "but Italian pasta producers have to say ’My durum wheat in this pasta box is from Canada.’ And the customer can choose."