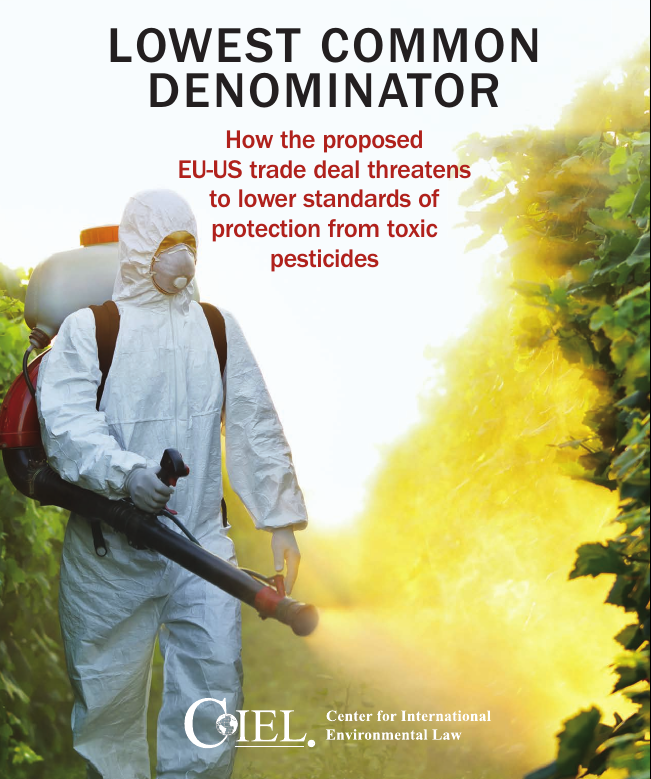 Washington, DC / Geneva – A new analysis exposes how the American and European pesticide industry is using ongoing EU-US trade negotiations to lower human health and environmental standards in order to increase trade in toxic pesticides. A new study by the Center for International Environmental Law (CIEL), Lowest Common Denominator: How the EU-US trade deal threatens to lower standards of protection from toxic pesticides, tracks how CropLife America and the European Crop Protection Association (ECPA) propose to use the ongoing Trans-Atlantic Trade and Investment Partnership (TTIP) negotiations to lower levels of protection in the EU relative to those in the US.

If adopted, the pesticide industry proposal would increase the amount of pesticide residue on food sold to consumers in Europe; allow the use of carcinogens, endocrine (hormone) disrupting chemicals (EDCs) and others toxic pesticides; and interfere with efforts to protect bees and other pollinators to safeguard food supplies for future generations.

“Using words like ‘harmonization’ and ‘cooperation’ the pesticide industry’s proposal hides its true aim: to weaken, slow, or stop efforts to protect people and the planet from exposure to toxic chemicals,” says the report’s co-author Erica Smith. “This report demonstrates the pesticide industry’s goal of increasing trade, at the cost of increasing the risk to European and American citizens.”

According to the report, CropLife and ECPA’s proposal also threatens to block public access to information crucial to developing non-toxic alternatives; interfere with the democratic process by usurping the regulatory authority of US States and EU Member States; and install a “regulatory ceiling” hampering global pesticide regulation.

The EU and US have not disclosed their positions with respect to the proposals by CropLife and ECPA; however, for a leaked document from the EU incorporates CropLife proposals on the amount of pesticide to be allowed on food.

“In November, the EU pledged to make a ‘fresh start’ by increasing transparency in TTIP negotiations,” says Baskut Tuncak, Senior Attorney at CIEL and co-author. “However, following this fresh start, we still see business as usual. TTIP negotiations, which stand to impact the health and environment of hundreds of millions of people across the Atlantic, are simply too important to take place behind closed doors. We need transparency, we need accountability, and we need to know negotiators’ positions on pesticides before they are presented to lawmakers as a final, non-negotiable package for an up or down vote.”

The next round of TTIP negotiations are scheduled this February in Brussels.

Link to full text of the report: http://ciel.org/Publications/LCD_TTIP_Jan2015.pdf