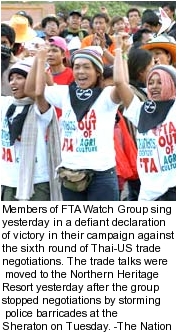 Thai negotiators say US demands on drug patents are an unacceptable extension of WTO position. The Thai-US free-trade talks hit a snag yesterday after the head Thai negotiator for intellectual-property rights declared demands by the US for Thailand to tighten up drug patenting as “unacceptable”.

As Bangkok toughened its stance, uncertainties appeared to grow over the Thai government’s decision to leave Parliament out of the whole process - and whether this breaches the Constitution.

The US negotiating team yesterday described the issue as an internal affair, but added that America face no such problem because its negotiations with Thailand have been “transparent” with Congress playing its role.

Kanisson Navanukhro, chief of Thailand’s Department of Intellectual Property Rights, who led Thai negotiators on the issue, said yesterday after seeing the US demands on drug patenting issues for the first time that the US conditions put Thailand and Thai drug users in a disadvantaged position .

“We cannot accept the US demands because their conditions were created only to benefit a developed country which has an advanced pharmaceutical industry,” he said. “But Thailand will have nothing to gain because our capacity in producing drugs is very poor.”

The negotiation text put forward by the US to Thai representatives at the first round of discussion on the issue yesterday contained many points that would reduce Thai peoples’ access to medicines.

Three of the most crucial points are:

lImposing five-year data-exclusivity provisions, which means a delay in the production of generic versions of a patent-expired drug reaching the market. The data-exclusivity rule would prevent the Thai Food and Drug Administration (FDA) from releasing clinical trial data of the original drug producers to generic drug companies for five years after the patent expires.

lRestricting the grounds that the Thai government can issue a compulsory licence (a World Trade Organisation mechanism that allows member countries to produce patented drugs for public non-commercial use or in the case of national public health emergencies). Under the WTO’s compulsory licence provision, developing countries, including Thailand, are allowed to make generic copies of patented drugs to cope with medical emergencies such as HIV/Aids. This has cut the cost of vital anti-retroviral drugs drastically, from Bt10,000 to Bt1,200 a month.

Tightening drug patents has been the most contentious issue of the Thai-US Free Trade Agreement. Thousands of people with HIV and Aids took to the streets over the past three days to rally against talks on the issue.

Pakdi Photisiri, secretary general of Thailand’s FDA, who was a part of the Thai negotiating team, said the US should respect its commitment to respect the WTO’s Doha declaration, which contains rules on compulsory licences.

“US representatives just said in Hong Kong [during WTO ministerial meeting last month] that it will respect the WTO Doha declaration, that it would follow the Doha declaration. So it should not force any country with conditions that go beyond the WTO agreement,” he said.

Kamol Uppakaew, of Network of People Living with HIV/Aids, voiced support for the Thai negotiators’ strong stance. He said both Kanisson and Pakdi had to prove that they would really get tough - to protect the Thai people and the country.

“It is understandable that the government would vow to protect the national benefit, but you can’t just talk - you have to do it,” he said.

Kamol vowed that he and people with HIV/Aids would closely monitor the talks and the positions taken by the Thai government.

International health experts have backed local activists and urged Bangkok not to give up its right to use the flexibility in the WTO’s trade-related intellectual-property rights agreement.

Medecins Sans Frontieres (Doctors Without Borders) called on Thailand to prtect access to vital drugs in the face of US pressure.

“We fear that if the Thai government accepts the US proposal, doctors in Thailand will face substantial obstacles in providing treatment to their patients living with HIV/Aids, especially for those that require newer anti-retroviral (ARV) medicines to survive,” MSF chief in Thailand Paul Cawthorne said in a statement.

“This week, we have seen thousands of Thais demand that their government protect access to medicines and defend the national HIV/Aids treatment program. For the sake of the thousands of Thais who depend on the low-cost of medicines, we hope they succeed.”

He said the US “accepted in principle” that the terms jasmine rice and Thai silk could only be used for products that originated from Thailand. This would increase the protection status of Thai rice and silk to the same status of wine products “protected” by the WTO. But he said the details still needed to be discussed.