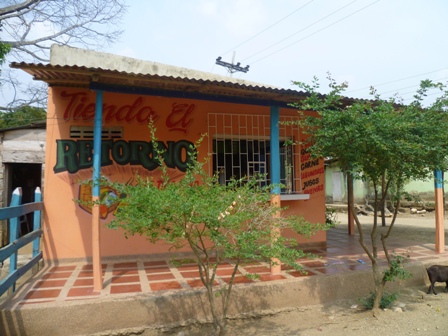 ’Tienda el Retorno’ (Shop of the Return) in Macayepo, Bolivar department. Community members displaced following a massacre which took place there have started to return to their land. The Victims and Land Restitution Law, passed in 2011, is a transitional justice law which aims to restore approximately 2.2 million hectares of approximately 6.6 million that has been usurped or abandoned during the conflict. Photo credit: ABColombia

Read the text from the House of Lords debate here

This BIT poses grave risks to the achievement of human rights and the successful implementation of agreements that are currently being made in the peace dialogues between the FARC guerrilla and the Colombian Government, taking place in Havana.

Ratification of the BIT:

1. Places the UK in danger of inconsistency with its current commitments to Colombia on human rights and the UN Guiding Principles on Business and Human Rights (UNGPs);

2. Fails to include current UK commitments on human rights in investment agreements made in the UK Action Plan (NAP) on the implementation of the UNGPs;

3. Threatens the ability of Colombia to regulate in the public interest, including on human rights, and does not offer safeguards for the inclusion of Investor-State Dispute Settlement (ISDS).

Colombia is one of the 28 ‘countries of concern’ of the UK Foreign and Commonwealth Office. These are countries which the UK considers have serious and wide ranging human rights problems. The UK acknowledges the significant human rights challenges in Colombia given the legacy of more than 50 years of conflict, and it has committed its support in various priority areas to help Colombia emerge from conflict. These priority areas include assisting Colombia to implement both the UNGPs on Business and Human Rights and the Victims and Land Restitution Law 1448 (2011).

The UK has recently undertaken significant commitments for the implementation of the UNGPs including through regulation of its economic activity. In particular, the UK has undertaken to ensure that “agreements facilitating investment overseas...incorporate the business responsibility to respect human rights, and do not undermine the host country’s ability to meet its international human rights obligations.” The UK-Colombia BIT is out of line with this clear commitment and as it is written it could restrict the Colombian Government’s ability to meet its international human rights obligations.

The vaguely written BIT puts at serious risk Colombia’s capacity to implement agreements they are making in Havana in the current peace dialogues with the FARC guerrilla. It also puts at risk the implementation of laws which offer reparation and land restitution to some of the victims of the conflict, such as the Victims and Land Restitution Law 1448. This law, passed in 2011, has a 10 year implementation; it is threatened by possible litigation under the BIT.

The UK has placed itself in the incongruous position of committing to support implementation of the Victims and Land Restitution Law, whilst at the same time opening avenues to challenge its implementation through unqualified ISDS proceedings in the BIT. This could put the UK in the untenable position of ratifying a BIT that directly threatens the very progress the UK has committed to supporting in Colombia. It is essential that UK economic policy, including the UK-Colombia BIT, does not undermine its own commitments to respect and protect human rights and to support Colombia in this endeavour.

The BIT lacks the clarifications and safeguards proposed by the European Commission and recommended by the House of Lords in relation to the EU-USA Transatlantic Trade and Investment Partnership, and as such the UK-Colombia BIT:

Increases uncertainty for investors and States;

Increases the risk of litigation;

Heightens the threat to the States’ ability to regulate for the public good;

Offers little guarantee that decisions resulting from ISDS will be in line with the States’ intentions.

Download the full analysis on the UK Colombia Bilateral Investment Treaty in English and Spanish.

Read the letter sent by ABColombia and Traidcraft to the UK Secondary Legislation Scrutiny Committee on the UK Colombia Bilateral Investment Treaty.

Read Lord Alton’s intervention in the Debate on the BIT in the House of Lords on 30 July 2014.