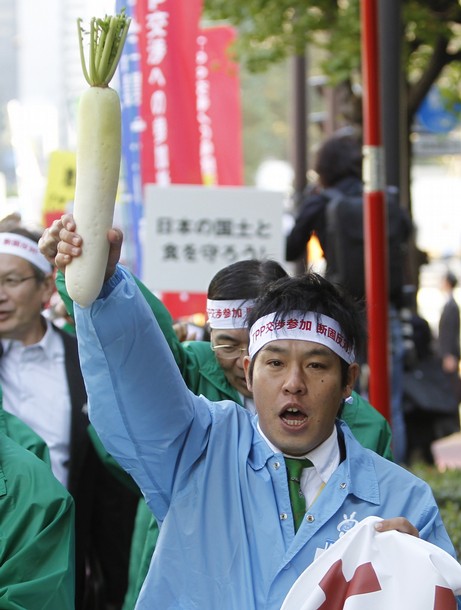 A farmer marches with a radish against the TPP in Tokyo on 10 November 2010 (Photo: Reuters)

By the CNN Wire Staff

The agreement aims to ease trade in the Asia-Pacific region

Joining the pact — known as the Trans-Pacific Partnership, or TTP — would destroy Japanese agriculture and community, protest organizers said.

The leaders of APEC’s 21 member nations will gather for a summit hosted by Japan in Yokohama on Saturday and Sunday.

Such efforts "will greatly contribute to the world’s economic growth,’’ said Japanese Foreign Minister Seiji Maehara, according to the Kyodo news service.

"I’m against it. I’m definitely against it," said a farmer who joined others who rallied, then marched around the Japanese legislative building.

"We can never trust our government," the farmer added.

The crowd estimate of 3,000 protesters came from Japan Agriculture. Japanese authorities do not offer crowd estimates at protests, but the 3,000-seat stadium where the farmers gathered appeared packed.

"We’d like to have this rally as the start of national movement against Japan’s joining the TPP," Japan Agriculture said.

The government of Prime Minister Naoto Kan is not expected to make a decision on the trade pact until June 2011. But the agreement should never have been initiated, Japan Agriculture said.

"We would like to stress that we are firmly against joining the TPP and we can never allow it to happen," the group said.

CNN’s Yoko Wakatsuki and Kyung Lah contributed to this report.