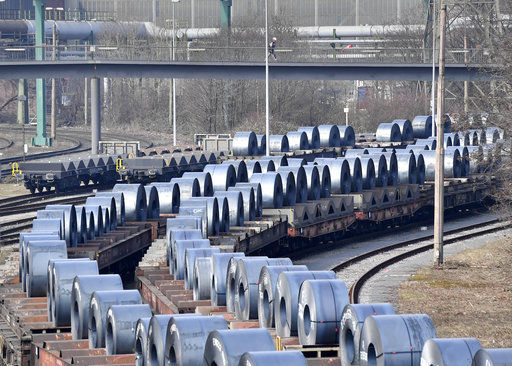 The US Treasury Department has just announced the full implementation of steel and aluminium tariffs on imports from the EU as well as from fellow North American Free Trade Association (NAFTA) members Canada and Mexico. Mexico and Canada’s steel exports to the US account for 26% of all US steel imports while steel imports from the EU are considerably lower, but still not entirely insignificant by any means. To put further pressure on an already furious EU, Donald Trump has further threatened a ban on all German car imports which could have a devastating effect on Europe’s largest national economy, as well as a deeply negative effect on US consumer choice.

While American dependence on Chinese imports led to a US climb-down in the touch and go trade war with China, it would appear at least for now that Trump is being less charitable with traditional US allies than he is with superpower rival China. The irony in this is that because China is able to leverage the US due to the inability of many US industries to function without Chinese goods, the colossal output and global reach of Chinese exports and the fact that China holds $1.18 trillion worth of US Treasury debt, Beijing is able to retaliate against US tariffs with comparative ease, while many countries that never expected the arrival of a US President so hostile to America’s traditional free trading partners, will have to think fast and act faster. That being said, the EU has vowed a swift response to Washington’s tariffs, while the knock-on effect of forcing the EU to open its markets to China while easing sanctions with Russia, could also be forthcoming from Berlin, Paris and Brussels in the event of a protracted tariff war with the US.

What is already clear is that the age of global free trading blocs that appeared on the horizon during the Obama years appears to be over as far as the United States is concerned. The much vaunted Transatlantic Trade and Investment Partnership (TTIP) which would have seen the EU and NAFTA create a free trading mega-zone is now all but dead as Washington and Brussels continue to threaten each other with more trading barriers.

Upon taking office, Trump used his executive power to crush the Trans Pacific Partnership (TPP) which would have seen many of Washington’s Asia-Pacific partners, Australia, NAFTA and much of Latin America form a single free trading zone. Today, NAFTA which was formed in 1994 is under threat from Trump who has vowed to either re-configure the free trading bloc or scrap it entirely.

While on the surface these events might look like a return to early 20th century style global protectionism, in reality the world is moving further in the direction of free trade, only this time the primary stimulus for a free trading globe is coming not from Washington and Wall Street but from Beijing and Shanghai.

China’s preferred model of free trade has already won a favoured position in developing countries vis-a-vis the US model. The US model of free trade prioritises an opening up of markets without any precondition for investment in poorer trading partners, while Washington also has a habit of attaching multiple political strings to such agreements which tend to have a stifling effect on national sovereignty in developing nations. By contrast, the Chinese model of free trade tends to associate a mutual opening up of markets with generous investment from China in the form of cash injections, the building of infrastructure, long term development funds and fair credit lines. Most crucially, China’s One Belt–One Road looks to create a more even footing among free trading nations by giving developing nations the same logistical assets that have traditionally only been available to advanced wealthy economies.

While China prioritises peace through prosperity, the US models of free trade which reached their zenith in the Obama years tended to enforce an attitude of hegemony through subservience to the dominant power, all the while depriving both developing nations and the domestic US economy of much needed investment. Thus, the failed Obama model sought to deprive developing nations of sovereignty all the while harming the US worker as 1990s American political icon Ross Perot warned as early as 1992.

Now though, the Chinese model which is laissez faire in terms of political requirements of a potential partner and pro-worker in the sense that China’s investment model seeks to balance productivity and industrial output among all trading partners, is becoming increasingly attractive both to developing nations and wealthy nations with a long history of trading with the US. In this sense, while free trade might appear to be a universally understood concept, the US definition of free trade is incredibly different than the Chinese definition of free trade. Taken as a whole, the Chinese conception of free trade is far freer and also far fairer than the US model which Donald Trump is rapidly replacing with unilateral protectionist machinations.

The EU, South Korea, Japan, Mexico and Canada have not so much adopted the Chinese model of free trade as they have been shown through experience that while the US uses tariffs to extract often extraordinary concessions from long term partners, China operates on a much more pragmatic, consistent and reliable basis.

While the EU in particular has not yet taken the proverbial plunge and opened up its markets to Chinese goods in the way that Beijing seeks, such an opening up may be inevitable for two simple reasons. First of all, as China is now the single biggest/wealthiest domestic market in the world, it would behove European producers of globally sought after luxury goods to gain a firmer foothold in such a market. Secondly, with the US not only closing its doors to Europe but doing so in a manner not befitting of an “ally”, the EU may soon realise that dealing with China is in fact easier to deal with in the long term than the more historically familiar United States.

The same logic clearly applies to South Korea which is already expanding its trading partnerships away from its traditional US ally. Japan too is well aware of where the future ‘trade winds’ are blowing in spite of lingering caution regarding the perpetual rise of China over Japan’s strong yet largely stagnant economy. As for Canada and Mexico, if NAFTA collapses, a phenomenon that today’s tariff announcement has if anything greatly hastened, Chinese partnerships for trade will look increasingly attractive. This will be especially true if as widely predicted, the multi-polar leaning Andrés Manuel López Obrador becomes Mexico’s next president in early July.