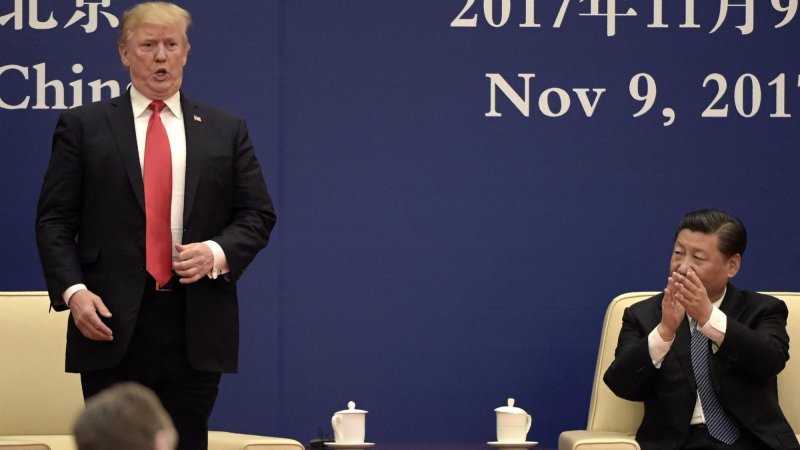 By Iain Marlow and Kanga Kong

For years, smaller nations in Asia have looked to the U.S. to provide a counterweight to an increasingly powerful China. Under President Donald Trump, they are learning to fend for themselves.

Trump declared his 11-day swing through Asia a success before heading home on Tuesday, saying that “all Countries dealing with us on TRADE know that the rules have changed.” On each stop, he devoted most of his time to trade deficits, moving away from a U.S. strategy since World War II to enhance economic linkages in Asia as a way of boosting security ties and deterring conflict.

The approach is a sharp contrast with former U.S. President Barack Obama, who announced a pivot to Asia backed up by an increased military presence and the Trans-Pacific Partnership trade deal. Trump subsequently called for U.S. allies to pay more for security, and immediately withdrew from the TPP.

The U.S.’s emphasis on negotiating — and revising — deals that put “America First” is raising alarms in a region where China is already the top trading partner for most countries. As frictions with the U.S. grow under Trump, smaller countries are searching for new solutions to avoid becoming overly dependent on China for economic gains.

That was seen over the weekend when Japan, in particular, pushed to revive the TPP. The 11 remaining members announced a framework agreement on the pact while Trump was in Vietnam defending his decision to shun such multilateral agreements in favor of bilateral deals.

“The credibility of the U.S. is going down, so regional actors are trying to do their own things,” said Harsh Pant, a distinguished fellow at the New Delhi-based Observer Research Foundation who has written books about defense policy in the region. “That is now the new normal, where regional states will have to come up with new ideas and new solutions to regional problems, and the U.S. will fit in where it can.”

Trump appears to want it that way. In a meeting with Southeast Asian leaders Monday in Manila, he called for a “free and open Indo-Pacific.” The phrase reflects the U.S. desire for India to play a bigger role in its security matters.

“We want our partners in the region to be strong, independent, and prosperous, in control of their own destinies, and satellites to no one,” he said.

Still, Trump’s focus on trade deficits risks doing just the opposite. Already over the past decade, the 10-nation Association of Southeast Asian Nations has grown more reliant on China, which accounted for 15 percent of its total trade last year compared with 9.4 percent for America. Back in 2007, Asean traded more with the U.S. than China.

South Korea, which agreed to revise its bilateral deal with the U.S., is being pulled toward China under Trump and the longer term consequences are unclear, according to a person familiar with the country’s trade policy who asked not to be identified speaking about internal deliberations. Too much reliance on China is potentially strategically dangerous, the person said.

China punished South Korea after it allowed the installation of a U.S. missile shield to defend against North Korea, with Beijing restricting tourism and making life hard for its companies. While both nations agreed last month to move past the dispute, China hasn’t yet fully restored economic ties.

The South China Sea is another area where China can use its economic might to advance its geopolitical aims. In Hanoi, Trump offered to broker a peace deal between China and Southeast Asian nations like Vietnam and the Philippines, which has already shifted toward Beijing under President Rodrigo Duterte.

“President Trump’s offer to be a mediator in the South China Sea was off-balance,” Michael Fullilove, executive director of Sydney-based think tank the Lowy Institute. “Because you have a very significant power imbalance between China and its neighbors, mediation isn’t what’s required. Support from the U.S. for those smaller Asian nations is.”

At the Asia-Pacific Economic Cooperation summit in Vietnam, Trump and Chinese President Xi Jinping again laid out competing visions for globalization. While Trump said he wouldn’t enter large trade agreements “that tie our hands,” Xi painted a picture of a global order that would bring collective benefits.

Government officials in the region regularly have said they want the U.S. to engage rather than withdraw, according to Carlos Gutierrez, chair of Washington-based Albright Stonebridge Group and former commerce secretary under President George W. Bush. While Trump’s moves to undercut international agreements can disrupt business activity, the U.S. retains a cultural advantage, he said in an interview in Singapore.

“In absolute terms, I think the U.S. will continue to be a powerhouse,” Gutierrez said. “We’ll lose some time, but I think it’s way too early to say this is the beginning of the long-term decline of the U.S.”