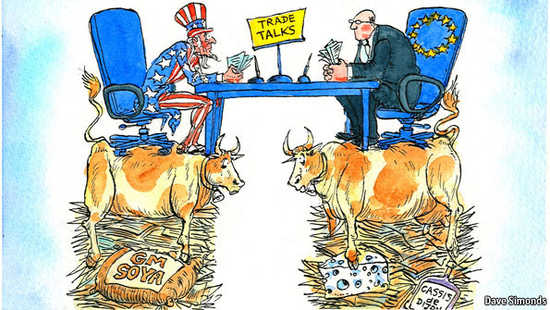 In the first event of its kind, the Greens/EFA in the European Parliament with the support of civil society and farmers’ organisations from both sides of the Atlantic, is pleased to invite you to a conference on the impacts of a potential EU-US trade agreement (TTIP) on food and farming.

With invited speakers from the food and farming sectors and civil society, and invited respondents from the European Commission, this conference promises to be an open and frank debate on TTIP and its potential consequences on food safety standards, consumer rights, animal welfare and the wider impact on rural areas.

With much of the debate on TTIP focusing on questions relating to food, we want to examine in further detail:

How can such differing standards for food and farming be harmonised without a serious compromise on the European side?

Will TTIP lead to the further industrialisation of agriculture in Europe?

Who benefits from the deal? Agri-businesses or farmers?

How can we maintain a high level of transparency and traceability for European consumers?

How a lack of transparency in the negotiations themselves is doing nothing to stem public fears that the TTIP negotiations could already be watering down key rules and standards for food and farming.

Share information and raise awareness about concerns how TTIP could water down key rules and standards for food and farming and how fierce competition from agrobusiness would undermine ecological robust forms of agriculture and small scale farmers. To make clear that the constant reassurance by the EC that EU food laws or standards will not be changed, are not to be trusted. Simply because cheaper production methods in US will compete heavily with EU production.

Format 3 hrs: with 3 panels of 4 Short contributions followed by debate

What is our angle? Overarching topic: How can DG Trade say there will be no lowering of EU standards, if EU and US diplomats negotiate on harmonisation and mutual recognition? "Right to choose" vs "priority for increasing transatlantic trade". Also "unfair - no level playing field - economical competition" because of "cheaper industrial food production" vs "agriculture bound to minimal ecologic and animal welfare standards".

Possible topics for the sessions

Precautionary principle and Procedures how products are assessed in EU, risk management and controls on trade.

HARMONIZING RULES AND STANDARDS – A RACE TO THE BOTTOM?

Objective: clear examples about different standards applied in EU and US

Objective: Who benefits in the farming sector, who is losing and impacts on working conditions