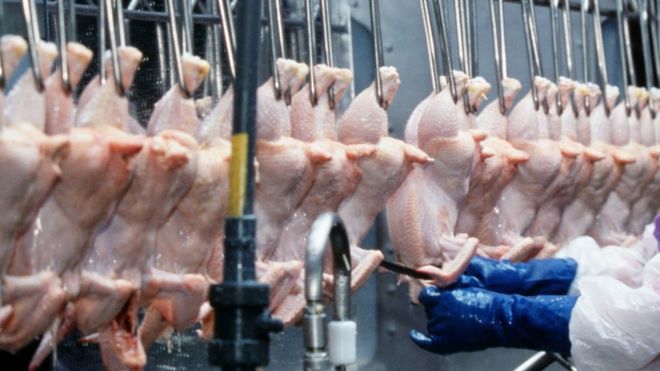 UK will be forced to accept US food standards in a Brexit trade deal with Trump, warns former trade chief

LONDON — The UK will be forced to accept US demands for the UK to change its food safety standards if it enters into a post-Brexit trade deal with the Trump administration, the former head of the UK’s International Trade Department has told Business Insider.

Sir Martin Donnelly, who was the Permanent Secretary of the Department for International Trade until 2017, said that any trade deal would be heavily weighted in the US’ favour once Britain has left the EU.

"If Britain wants a trade deal with the United States, it’s going to be largely on United States terms, and it’s not clear what we would get in return," Donnelly told BI.

He said that Washington would likely demand that the UK accepts US environmental and health standards. These include allowing chlorine-washed chicken and hormone-treated beef — as well as a raft of other punitive measures.

"All American administrations have been clear on the importance of agricultural exports," Donnelly said.

"The UK’s position on environmental health issues and animal health is essentially that of the EU. So it’s hard to see how you come to a quick trade deal with the Americans which delivers for the UK as opposed to just delivering for Washington."

The former civil servant told BI that the smaller size of the UK to the EU would weaken its relative bargaining power.

"We’re about a fifth of the size of the US. So we’re not in so strong a position to insist on maintaining our own standards as part of a deal.

But it will not be straightforward to do a deal with the United States.

"We tried very hard from the European Union side for many years, and there are real obstacles which reflect the different political and economic choices made in Europe and the US."

"All of these issues underline that a trade deal with America is neither straightforward nor necessarily going to produce significant benefits for the UK as opposed to the United States," said Donnelly, who served as permanent secretary at the Department for International trade until 2017.

The US Trade Representative earlier this month published its "negotiating objectives" for a future trade deal with the UK once it has left the EU.

The document states that the UK must "remove expeditiously unwarranted barriers that block the export of U.S. food and agricultural products.

It adds that "unjustified trade restrictions," such as the ban on the sale of chlorinated chicken and hormone-injected beef in the UK, must be removed in order to "eliminate practices that unfairly decrease U.S. market access opportunities."

BI highlighted last year that under US food regulation, producers are allowed certain amounts of foreign bodies such as maggots, rat-hair and mould in a range of food products sold to consumers.

In the US, producers adhere to a "Defect Levels Handbook," which sets out the maximum number of foreign bodies like maggots, insect fragments and mould that can be in food products before they are put on the market.

For example, US producers are allowed to include up to 30 insect fragments in a 100-gram jar of peanut butter; as well as 11 rodent hairs in a 25-gram container of paprika; or 3 milligrams of mammalian excreta (typically rat or mouse excrement) per each pound of ginger.

Trade secretary Liam Fox has said a free trade agreement with the United States is one of his department’s "top priorities" when the UK leaves the EU.

However, the EU’s rules on food standards are vastly different and significantly more strict than in the USA. That means the UK, which follows EU rules, can’t import certain foods such as chlorinated chicken which do not meet its standards.

Senior US officials in the Trump administration, including Commerce Secretary Wilbur Ross, have insisted that the UK would have to scrap EU rules on environmental animal health and accept American agricultural goods, while Liam Fox has repeatedly stated that the UK will not lower food standards after Brexit.