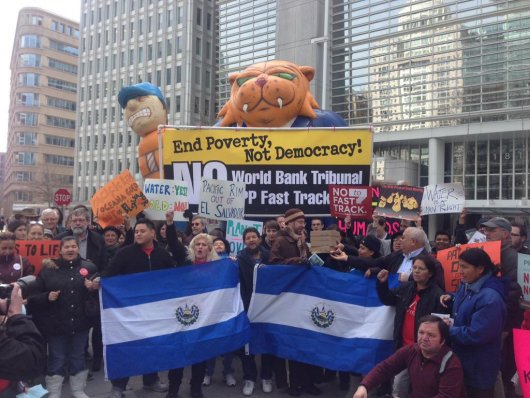 On 19 March 2015, activists and representatives of the platforms against mining in El Salvador demonstrated against the legal dispute between that country and the mining company OceanaGold, in front of the World Bank’s headquarters, in Washington D.C. (Luis Parada)

Will El Salvador be forced to pay $301 million for valuing clean water over gold?

The Central American state of El Salvador could be forced to pay US$301 million in damages to an Australian-Canadian mining company, OceanaGold, after the company’s application for a mining license was rejected on the basis of the projected environmental damage it would cause.

El Salvador is the most water-stressed country in the region. As a result, the government stopped granting mining licenses back in 2008 in an attempt to preserve the country’s limited clean water supplies and safeguard the environment.

But Australian mining company OceanaGold Co, and its subsidiary the Canadian Pacific Rim Mining Co, have referred the case to the International Centre for Settlement of Investment Disputes (ICSID), an obscure World Bank body based in Washington.

Although no deadline has been set, a ruling is expected in the coming weeks or months.

The Salvadorian government, along with various local and international trade unions, political parties, church and community groups, has expressed grave concern at the prospect of an unfavourable ruling.

“It is essential that we win the case, as it means many millions for El Salvador,” Environment Minister Lina Pohl told Equal Times. Losing the case, the minister explained, would threaten the government’s policy on metals mining.

“In 2011, we conducted an environmental assessment which determined that El Salvador does not have the right conditions for this industry,” she explained.

In 2011, a Strategic Environmental Assessment concluded that mining was not feasible in El Salvador for four reasons: 95 per cent of its rivers are polluted; the amount of gold that could be mined in the country would only attract “minor companies” with low environmental standards; the existing bureaucracy is insufficient to ensure close monitoring of the mining projects; and strong opposition from residents in the affected areas.

Yet, in the case presented to the ICSID, OceanaGold is claiming that El Salvador has violated its right to exploit gold in the El Dorado mine, in the department of Cabañas, in the centre of the country.

According to the company: “The mining permit was suspended on political not technical grounds.”

The government’s response is that OceanaGold never obtained a permit to exploit gold, as it did not perform the necessary environmental impact and feasibility studies, nor did it secure the titles to the land required for the concession.

In 2008, the government halted this project, and other mining concessions, on the grounds that there are insufficient guarantees that mining can be developed without pollution.

In 2009, mining firm Pacific Rim – now OceanaGold Corp. – responded to this moratorium on mining permits with a lawsuit against El Salvador, arguing that there was no law prohibiting mining.

The new mining legislation is still under discussion in Congress.

“It would set a negative precedent if El Salvador were to lose the case before the ICSID, as other – not only mining – transnationals will be able to sue the Salvadorian state for millions, exploiting a legal vacuum that emerged in 2008,” warns Pedro Cabezas, a member of the Mesa Nacional Frente a la Minería Metálica (MFNMM), a national platform against metals mining grouping together ten environmental organisations.

“El Salvador’s sovereignty and ability to govern itself in the public interest is at stake. It’s a matter of whether the government has to serve corporate interests alone, because of trade agreements,” says Cabezas.

The mining industry in El Salvador represents a major source of income for a country with deep inequalities and problems financing its public policies.

“The government is not saying no to mining, but under the current circumstances in the country, at this moment in time, it is not feasible,” explains Minister Pohl.

The government has, since 2011, been trying – unsuccessfully – to pass a mining law in Congress, whereby a panel of international experts together with a number of public servants would only be able to approve mining operations once the issues identified in the Strategic Environmental Assessment have been resolved. But this and other proposals are still under discussion in Congress.

“The fact is that OceanaGold knows there is no scope for mining here. What they want is to put pressure on. And that’s what makes the lawsuit an act of extortion against the country,” says Cabezas.

Equal Times sent several emails to OceanaGold’s legal representatives but was still awaiting a response as this article went to press.

A number of local communities in El Salvador have decided to move ahead of the national debate and have already set out their position on mining.

At the beginning of March, the municipality of Nueva Trinidad, in Chalatenango, became the third municipal authority to pass a local law against mining.

“It is crucial that local communities organise, because the value of silver and gold cannot be compared with that of health and a healthy environment. Unfortunately, no attention is being paid to the voice of the communities in this controversy,” Magdalena Mármol and Francisco Quijano, spokespersons for the national trade union centre Central Autónoma de Trabajadores Salvadoreños (CATS), told Equal Times.

The case against OceanaGold has gathered strength thanks, in part, to the support from US and Canadian civil society organisations and the pressure they have placed on their respective governments.

The joint complaint presented in June 2014 to the United Nations Human Rights Council by the Europe-Third World Centre (CETIM), the Institute for Policy Studies (IPS) and the Center for International Environmental Law (CIEL), for example, could trigger a response from member states.

This article has been translated from Spanish.