International trade: Calling on African leaders
4-May-2006 AllAfrica.com
Why is there a sudden shift to regionalism as opposed to the much over-blown globalisation represented by multilateralism? Can Africa begin to understand that there is a dynamic and concerted effort at balkanising the continent into segmented disciplines?
NGO says trade talks could pit one African national against another
13-Apr-2006
As African trade ministers continue their meeting in Nairobi, NGOs are trying to make their positions known on various issues, including the economic partnership agreement being negotiated between the EU and African states and agricultural subsidies used by rich nations.
Saharan states call for free trade agreements
17-Mar-2006 People’s Daily
The Saharan states have called for free trade agreements to help the region achieve peace, stability and prosperity.
Friend and foe
8-Mar-2006
China is muscling its way not only into the global economy but also into Africa, a world that SA companies might have thought was their oyster after the walls of apartheid came down a decade ago.
EPAs - another bad deal for Africa
7-Mar-2006
First, a recap: the West has over the years used structural adjustment reforms to keep Africa economically weak and increase the continent’s dependence on external loans.
EPAs remain roadmap for Africa’s development - EU
14-Feb-2006 Public Agenda
The European Union is still insisting that the Economic Partnership Agreements (EPAs) whose implementation it is currently negotiating with four sub-regional groupings in Sub-Saharan Africa remain the only option for Africa’s development.
Aid issue hinders progress in Africa, EU trade talks
13-Feb-2006 ANDnetwork
According to officials, dispute over whether Europe should provide aid to help African states prepare for increased competition ahead of a new trade regime, is hindering progress in talks between the two blocs.
China willing to negotiate FTA with African countries, organizations
12-Jan-2006 Xinhua
China is willing to negotiate Free Trade Agreement (FTA) with African countries and African regional organizations when conditions are ripe, according to China’s African Policy Paper issued Thursday in Beijing. The paper, the first of its kind, said the Chinese government encourages and supports Chinese enterprises’ investment and business in Africa.
Resist external forces, trade bodies urged
22-Sep-2005 AllAfrica.com
Regional trade integration bodies must stand together and prevent outside forces like the European Union (EU) from promoting divisions to suit their varied agendas, especially when dealing with African member states, a Government minister has urged.
Mandelson in ’illegal’ trade move
2-Sep-2005
In advice for a new report by the development charity ActionAid a lawyer in Matrix Chambers today warns that European Union trade commissioner Peter Mandelson is violating a legal duty to Africa by undermining alternatives to his trade plans which, critics fear, threaten the jobs of millions of poor people.
Civil society in revolt against EU-ACP trade agreements
2-Jun-2005 AllAfrica.com
African civil society organizations supported by a number of major European NGOs have moved into clear confrontation with the European Commission on the issue of the Economic Partnership Agreements (EPA). They say these deals will wreck domestic African agriculture and industry and are warning African politicians not to go along with them.
Summit indicates no plan to move toward FTA
6-Apr-2005 Jakarta Post
The upcoming Asian-African Summit will focus on establishing a new strategic partnership, and would not as yet move toward ideas of linking the two continents via a free trade agreement. "However, we have identified that (a FTA) is one form of cooperation that we can pursue in the long term," Indonesian Ministry of Foreign Affairs secretary-general Sudjadnan Parnohadiningrat said.
Trade, development, cooperation - what future for Africa?
18-Mar-2005
Bi- and multilateral trade relations between external actors and individual African states or regional blocs are becoming ever more decisive. The trade policies of both the USA and the EU are anything but helpful. 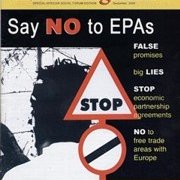 EPAs - Endless Poverty in Africa
6-Jan-2005 EPA Watch
Press release of the launch of the STOP EPA campaign at the Africa Social Forum in Lusaka, Zambia, on 14 December 2004
The Wrong Ointment
5-Nov-2004 CAFOD
CAFOD is asking the UK government to hold the EU to drop all ‘offensive interests’ in the EPA negotiations in Africa and provide African countries ‘alternative’ non-reciprocal trade relationships that are not free trade areas
Seeds of change
7-Oct-2004 The Guardian
Unable to get its own way through the World Trade Organisation, the EU is now shamelessly trying to corral some of the world’s poorest nations into bilateral trade agreements that would severely disadvantage them.
European Imperialism and Free Trade
14-Sep-2004 Indymedia Paris / Ile de France
The European Union is on the verge of implementing a series of free trade agreements and is leading a trade policy that can hold its own against the American policy.
Comesa plan hits a snag
2-Sep-2004
The drive for a Comesa Customs Union (CU) has suffered a major setback following sharp differences among member states on the proposed common external tariffs.
The Political Economy of Regional Trade Agreements in Africa
5-Jul-2004 The Political Economy of Regional Trade Agreements in Africa
Throughout history, international trade has generated considerable controversy. While conceding that some trade was imperative, Aristotle observed that trade was disruptive of community life. Until the 19th Century, most European powers viewed trade as a form of undeclared warfare. Their objective was - and still remains - the maximization of benefits accruing to themselves and minimization of those accruing to rival nations. The weapons of choice in this warfare were import barriers.
Is Africa for sale?
26-Mar-2004 Is Africa for sale?
This Sunday, trade representatives from member states of the Southern African Customs Union (SACU) will meet their counterparts from the United States in Walvis Bay, to resume negotiations for a bilateral Free Trade Agreement, expected to be concluded by the end of this year.
0 | ... | 220 | 240 | 260 | 280 | 300 | 320 | 340 | 360 | 380 | 400
Subscribe to bilaterals.org weekly