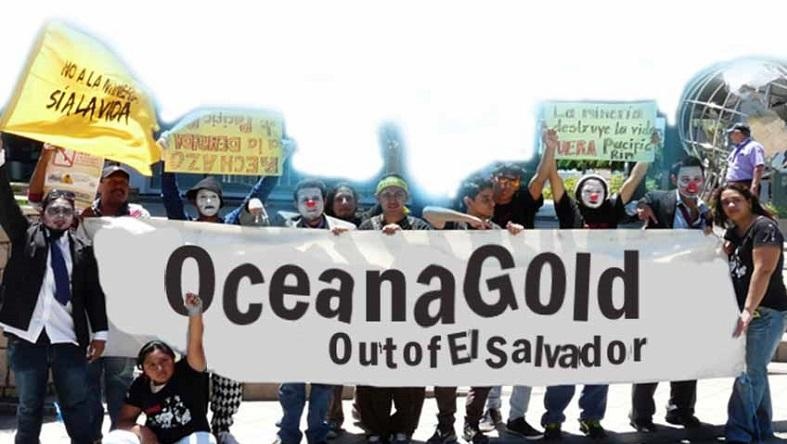 Analysis OceanaGold vs El Salvador: Foreshadowing ’trade’ under the TPP?

The Central American country of El Salvador could be forced to pay US$301 million to Canadian-Australian mining multinational OceanaGold as the two face off in a World Bank investor-state tribunal with proven tendency to favor corporate interests over arguments for protecting national sovereignty, the environment, and human rights.

The pending case in El Salvador gives a glimpse into what can likely be expected if controversial trade deals like the Trans Pacific Partnership (TPP) and Transatlantic Trade and Investment Partnership (TTIP) go through. With strong “investor protections,” the TPP and TTIP will pave the way for many more instances of investor-state settlements that allow companies to sue governments for billions through highly secretive hearings and supra-national courts.

The number of such corporate lawsuits levelled against countries in the World Bank’s little-known International Center for the Settlement of Investment Disputes (ICSID) has skyrocketed over the past decade. According to Mining Watch, while just three cases where brought to the body in the year 2000, this climbed to 169 cases in 2013. Trade agreements including NAFTA, DR-CAFTA, and hundreds of bilateral investment agreements include corporate-friendly provisions for investor-state settlement that allow companies, or investors, to sue governments if they claim their profits have been affected.

Like the ICSID tribunal hearing the OceanGold-El Salvador case, the flood of corporate lawsuits expected under TPP and TTIP mechanisms will similarly take place in grossly imbalanced “arbitration tribunals,” often referred to by critics as kangaroo courts that have a vested interest in favoring corporations over national and international public interest.

Gus Van Harten, Associate Professor at York University’s Osgoode Hall Law School and investment law and treaty arbitration expert, told teleSUR that states are at a major disadvantage vis-a-vis corporations in these investor-state processes both in terms of the court bias and the limited range of potential outcomes of arbitration.

OceanaGold Versus El Salvador, or Corporate Profits Versus Water Rights

OceanaGold filed a lawsuit against El Salvador in 2009 for not granting permission to the company’s El Dorado gold mine after the project failed to meet national regulatory requirements. Initially filed for US$77 million in the ICSID, OceanaGold has since upped the suit to US$301 million – amounting to about 5 percent of El Salvador’s GDP or equivalent to a three-year budget for health, education, and public security in the small Central American country. The ruling on the secretive proceeding is expected imminently.

OceanaGold, then known as Pacific Rim, applied for a mining concession to extract gold in El Salvador in 2004, assuring the project would benefit the community and be environmentally-friendly. The government denied approval to the mining proposal, primarily over fears of contamination of the El Salvador’s already scarce water resources. In the country of 6 million people, over 90 percent of surface water is contaminated. Metal mining has been a huge contributing factor, with some rivers many times over the national allowable limits of cyanide, iron, and heavy metals for potable water and groundwater contamination near mining sites.

The proposed OceanaGold mine project would have used thousands of tons of cyanide, used to separate precious metals from the earth, and hundreds of thousands of liters of scarce water resources on a daily basis.

Four years later in 2008, the Salvadoran government placed a moratorium on new mining projects. The policy move aligned with widespread community opposition to metal mining mega-projects that cause human displacement, environmental degradation, and public health risks. The moratorium has been maintained by successive governments with popular support.

By lodging the lawsuit against El Salvador, OceanaGold has aimed to take advantage of investor-state arbitration processes to boost its profits by undermining national policies protecting human rights and the environment. Acting at the super-national level, trade arbitration tribunals like ICSID fail to take human and environmental rights into consideration and can force governments to act against their own people. “The legal framework that has been created favors investors and violates the human rights of peoples.”

“The legal framework that has been created favors investors and violates the human rights of peoples,” explained Marco Galvez, President of the Association for the Development of El Salvador, in an exclusive interview with teleSUR. “When there are human rights violations, we don’t have anywhere to turn to at an international level, but investors do.”

The ICSID can order governments to make huge payments to companies or push through their corporate projects in spite of national policy usually prohibiting such approvals. In the case of El Salvador, a country whose US$3,826 GDP per capita is about 13 times smaller than that of the United States, facing a choice between the crippling US$301 million lawsuit – on top some US$13 million already incurred in legal costs – and approving the mine project would be devastating.

As a result, activists say the tribunal is essentially a form of extortion forcing El Salvador to act against its own people.

Yanira Cortez, Deputy Attorney for the Environment for El Salvadors’ Human Rights Prosecutor’s Office, said in an interview with teleSUR that these tribunals are a “violation of the self-determination of countries.”

The corporate-friendly bias of the tribunals against states is highly coercive. Fear of corporate retaliation could even intimidate governments into delaying or deciding not to implement protective policies, or retracting anti-corporate decisions when faced with a lawsuit. Investor-state arbitration processes favor private profits while denying governments mechanisms to protect their own public interests.

“We are somewhat worried about these types of tribunals because the tendency is that they always rule against states, there are very few cases where the state has won (over investors),” Galvez told teleSUR.

“An investor can sue a state but a state can’t sue an investor,” Galvez added. “There is an unequal situation that does not benefit our peoples.”

Van Harten, author of Sold Down the Yangtze: Canada’s Lopsided Investment Deal with China, said secrecy and lack of fairness are at the heart of concerns around the treaty arbitration.

“Groups like civil society organizations in El Salvador really have very limited opportunity to participate in these arbitrations even though the arbitration affects them,” Van Harten told teleSUR.

But while El Salvador faces off against OceanaGold, other Latin American countries are pushing back against unfair trade arbitration. Brazil never signed on to such foreign investment provisions, and Bolivia, Venezuela, and Ecuador have withdrawn from the ICSID convention altogether, barring corporations from levelling such lawsuits against them.

Many hope El Salvador will consider doing the same. “An investor can sue a state but a state can’t sue an investor. There is an unequal situation that does not benefit our peoples.”

“In El Salvador, social organizations are precisely demanding that our governments denounce ICSID, it is not a tribunal that benefits us. On the contrary, it will continue to extract resources from us,” said Galvez.

In the meantime, with the hands of the state tied in the arbitration, civil society blocked from the process, and no space within ICSID to bring human rights complaints or environmental appeals, mining-affected communities in El Salvador are working to create their own protections from the ground up. Three municipalities in the northwestern department of Chalatenango have already decided through referendums to ban mining to protects in their communities to protect their sovereignty and water rights.

While the national moratorium on new mining projects should protect community interests, trade arbitration and the pending US$301 million lawsuit in ICSID poses a major threat to El Salvador’s protective policy and widely supported stand against mining exploitation. 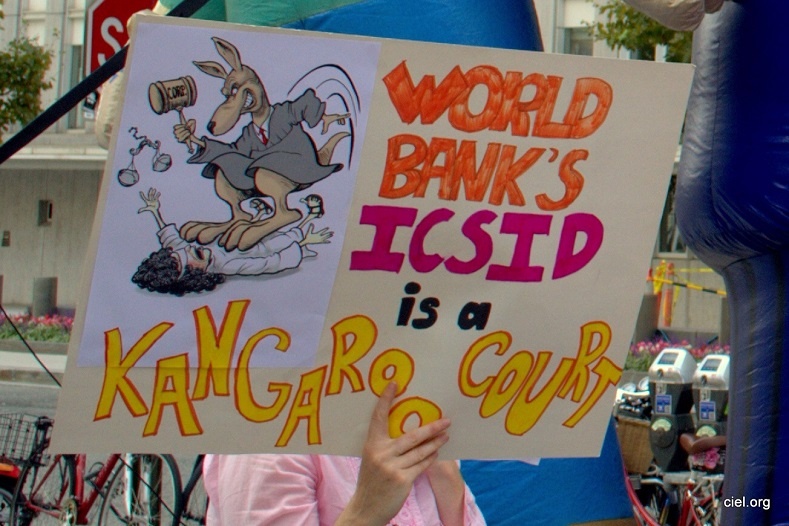 El Salvador’s experience in the ICSID serves as a cautionary tale of the highly unequal process of investor-state arbitration that privileges the private interests of foreign investors over human and environmental rights.

With the U.S. Senate approval of fast track authority for President Obama on trade deal negotiations bringing the TPP and TTIP one step closer to reality, the OceanaGold-El Salvador case also gives a preview of the kind of “kangaroo court” proceedings likely to proliferate if these controversial trade deals with strong “investor protections” are approved.

TPP alone includes the U.S. and 11 other Asia-Pacific and Latin American states, representing 40 percent global GDP. The breadth of the TPP, and similarly the TTIP, would vastly increase the power of corporations to level lawsuits against states and challenge their policies, such as nationalization or expropriation, if a corporation feels it has infringed on its current or future profits. “​The actors who arguably need the least protection, very large transnational corporations and very wealthy individuals, are the ones who have by far the most protection in international law as a result of the current system of state arbitration.”

And the trade arbitration isn’t only a threat to governments in the global South. Both Cortez and Galvez warned that all countries are at risk of being prosecuted in these tribunals, not just developing countries.

Canada has also found itself on the other side of the trade arbitration equation, being on the receiving end of about 50 percent of investor-state lawsuits filed under NAFTA.

In the face of this, critics of investor-state arbitration have called for a removal of these provisions from trade deals and a transformation of the investor-state system.

Cortez echoed calls for reform in the name of protecting people over profits.

“We are at the right time to review these free trade agreements... and eliminate all those parallel forums that lead to the violation of the human rights of populations,” said Cortez.

For Van Harten, countries seeking alternatives that prioritize protection of human and environmental rights should above all refuse to sign off on trade agreements that grant these arbitration powers to corporations and to exit current treaties that include these provisions. However, he also acknowledged that stringent and anti-democratic trade deal rules often make an exit process difficult and lengthy, further underlining the unfair and essentially anti-state nature of these mechanisms.

The investor-state system is “deeply flawed” according to Van Harten, and these flaws will only be replicated and deepened in the TPP and TTIP.

“The actors who arguably need the least protection, very large transnational corporations and very wealthy individuals, are the ones who have by far the most protection in international law as a result of the current system of state arbitration,” explained Van Harten.

And while corporate interests win, national sovereignty and democracy, human and environmental rights, and government attempts to carve out alternatives to corporate exploitation suffer major losses.

And with the approval of fast track, removing a major barrier for President Obama to finalize new trade deals like the TPP and TTIP, alarm should be raised over the fact that more pro-corporate, anti-democratic corporate lawsuits against governments like the case of OceanaGold versus El Salvador are more than likely imminent.

This content was originally published by teleSUR at the following address: http://www.telesurtv.net/english/analysis/OceanaGold-vs-El-Salvador-Foreshadowing-Trade-Under-the-TPP--20150623-0029.html