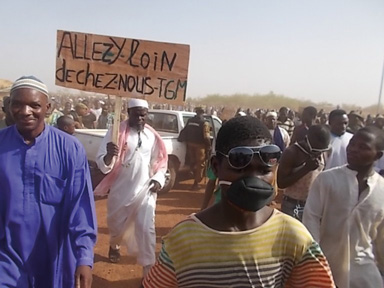 Since ousting Compaore, community groups and mine workers have launched a wave of protests against foreign-owned mining companies.

Sometimes what is good for business can be bad for people. Most Canadians understand this and cherish their right to protest "bad deals" and to elect new governments willing to reverse so-called "business-friendly" policies. This is called democracy.

So what do we call it when Ottawa signs a deal with an unelected regime that would prevent any future elected government in a small African nation from changing its laws regulating Canadian-owned mines for almost two decades?

In April, Harper’s Conservatives signed a Foreign Investment Promotion and Protection Agreement (FIPA) with the interim government of Burkina Faso. According to the official release, the West African nation was represented at the signing ceremony in Ottawa by Prime Minister Yacouba Isaac Zida, who was deputy commander of the presidential guard when Blaise Compaore was ousted by popular protest last October. A U.S. and Canadian trained Lieutenant Colonel, Zida is one of five military men in a cabinet overseeing the landlocked country’s transition towards elections after President Compaore’s 27-year rule.

While the caretaker government is supposed to move aside after an election planned for October, the investment treaty will live on for at least 16 years. According to the FIPA, "the termination of this Agreement will be effective one year after notice of termination has been received by the other Party." The subsequent line, however, reads that "in respect of investments or commitments to invest made prior to the date when the termination of this Agreement becomes effective, Articles 1 to 42 inclusive, as well as paragraphs 1, 2 and 3 of this Article, shall remain in force for a period of 15 years." In other words, any elected government will be effectively bound by the accord for another decade and a half.

What is of concern to the Conservatives is the impoverished nation’s mining sector, which is dominated by corporate Canada. Since ousting Compaore, community groups and mine workers have launched a wave of protests against foreign-owned mining companies. After local residents damaged equipment in January, Vancouver’s True Gold Mining shuttered its Karma gold project and an official from Montréal-based Semafo recently told Bloomberg that the company was looking to fund a new police unit that would focus on protecting mining interests.

Under the FIPA a Canadian mining firm could sue if the central government listened to a community opposed to a mine. Canadian companies have already used investment treaties to claim hundreds of millions of dollars in damages from Latin American countries that withdrew mining licenses after stiff local resistance.

A company could also sue if a new government required a certain level of domestic purchasing. The accord explicitly precludes "domestic content" requirements or any effort to "accord a preference to a good produced or service provided in its territory."

At a broader level, the aim of the FIPA is to counter a resurgence of "resource nationalism". Having received a free hand during the last decade of Compaore’s rule, Canadian companies fear a reversal of these policies. So, they seek rights to sue the country if a new government expropriates a concession, changes investment rules or requires value added production in the country.

Over the past decade Canada has become a mining superpower in Africa and the Conservatives have aggressively pushed the industry’s agenda. To protect $31 billion in Canadian mining investment from policy shifts, the federal government has signed or negotiated FIPAs with 15 African countries and officials have sent a message that aid is more likely to flow to a government that signs a FIPA.

The Conservatives are undermining African democracy in their haste to defend mining companies. It is unjust to persuade an elected government to concede power to an international investment tribunal and simply indefensible to sign a deal with an unelected transition administration that binds future governments.