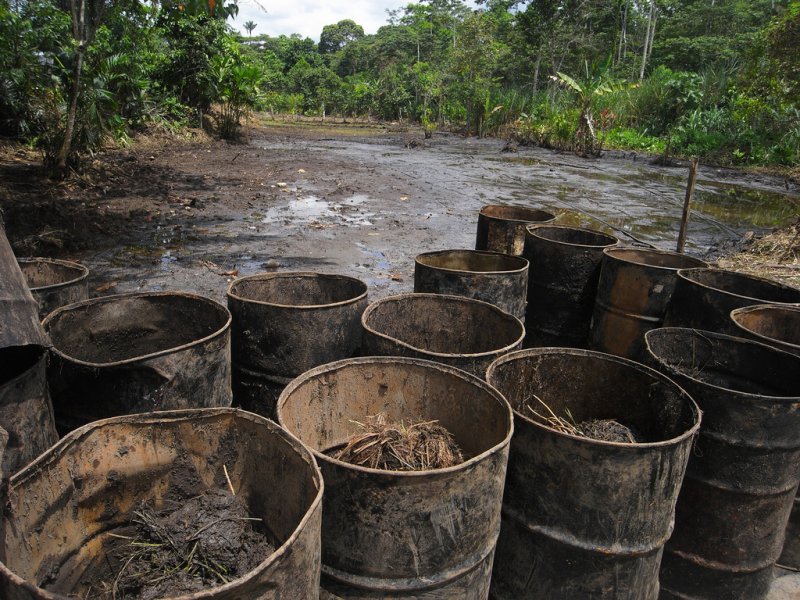 Davos, Switzerland – Prominent Swiss environmental organizations have crowned Chevron with an embarrassing "lifetime achievement" award for dumping billions of gallons of toxic waste into streams and rivers in Ecuador’s rainforest relied on by local indigenous communities for their water.

The Public Eye Award, which seeks to highlight the world’s worst corporations, is not the first to be bestowed on Chevron for its bad behavior in Ecuador.

In 2006, Chevron took home its first Public Eye prize for deliberately dumping more than 18 billion gallons of toxic wastewater into Ecuador’s rainforest waterways and leaving behind some 900 unlined waste pits filled with toxic sludge. Chevron operated in Ecuador from 1964 to 1992 under the Texaco brand. It abandoned the country without remediating the pollution that even its own internal audits concluded it caused.

Several independent health evaluations submitted to courts have confirmed high rates of childhood leukemia and other cancers in the area where Chevron operated. More than 2,000 people are estimated to have died from cancer with another 10,000 currently at risk of contracting cancer because of continued exposure to carcinogenic chemicals in surface waters, groundwater, food, and the air.

Five indigenous groups – the Secoya, Cofan, Huarani, Siona, and Quichua – have seen their traditional cultures decimated because of Chevron’s dumping practices, according to evidence presented to an Ecuadorian court. The court found Chevron liable in 2011 and imposed a $9.5 billion damages award.

Chevron has refused to pay the award. Its lead lawyer has vowed the company would fight the judgment "until hell freezes over, and then we’ll fight it out on the ice."

"Chevron is a recidivist toxic polluter that deserves condemnation from the world community for its horrific acts against the vulnerable indigenous peoples of Ecuador," said Paul Paz y Miño, of the U.S-based environmental and human rights group Amazon Watch. Amazon Watch nominated Chevron for the "prize", which is hosted by the Swiss NGOs Greenpeace Switzerland and the Berne Declaration.

Chevron had some heavy competition for the lifetime award this year, but the oil giant managed to beat out Dow Chemical, Gazprom, Glencore, Goldman Sachs and Wal-Mart in the online voting.

Amazon Watch has worked with rainforest communities throughout the Amazon for more than 16 years and has locked horns with Chevron management for more than a decade over the company’s refusal to accept responsibility for the Ecuador disaster. The group recently beat back a lawsuit by the oil giant in part designed to pressure Amazon Watch to give up its campaign.

Paz y Miño, who traveled to Davos to "accept" the award on Chevron’s behalf, emphasized that Chevron – the third largest corporation in the United States – is a most deserving winner.

"Chevron deliberately caused a lifetime of suffering and death by polluting the Ecuadorian Amazon to increase its already high profits to obscene levels," he said. "Chevron has also inflicted years of abusive lawsuits designed to leave affected communities defenseless and has tried to win by might what it could never win by merit."

Paz y Mino said Chevron earned the award in part by engaging in the most well-financed corporation retaliation campaign in history. Chevron has admitted it has used at least 60 law firms and 2,000 lawyers to fight the indigenous communities and has spent an estimated $2 billion on its legal defense. Chevron recently threatened the affected communities with a "lifetime of litigation" if they persisted in pursuing their claims.

Indigenous communities originally sued Chevron for clean-up in 1993 in U.S. courts just miles from Texaco’s global headquarters. Chevron fought for years to move the case down to Ecuador, arguing in numerous affidavits that the country’s court system was fair and that it would accept jurisdiction there.

When the evidence against it mounted in the ensuing trial in Ecuador, Chevron stripped its assets from Ecuador and then went back on its word and began to attack the very courts it had previously praised. Chevron also returned to the same U.S. court where it blocked the original lawsuit and filed a civil racketeering case against indigenous leaders and their lawyers.

Chevron’s sale of its assets in Ecuador forced the communities to try to seize company assets in jurisdictions such as Canada to force it to comply with the Ecuador court order. But Chevron is now arguing its assets in Canada should be immunized from judgment because they are held in wholly-owned subsidiaries, even though 100% of the profits of those subsidiaries flow to Chevron shareholders.

Chevron also has sued financial supporters of the communities, more than 100 individuals of in the U.S. who have tried to publicize their plight, and even Ecuador’s government seeking a taxpayer-funded bailout (by Ecuadorian citizens) of its liability. Their actions have drawn condemnation from some of the world’s largest environmental and human rights NGOs including The Sierra Club, Greenpeace USA and Amnesty International.

In contrast to Chevron’s avowed "lifetime of litigation" strategy, BP created a $20 billion compensation fund immediately after its 2010 accidental spill in the Gulf of Mexico without as much as a trial.

Ecuador’s highest court – the National Court of Justice – recently affirmed the judgment against Chevron in a unanimous decision. In all, three layers of courts in Ecuador and nine judges in total have reviewed the evidence and affirmed Chevron’s liability.

"Chevron is making a mockery of the rule of law around the world," said Humberto Piaguaje, an indigenous leader who has fought Chevron for almost two decades. "We are pleading with courts to stand up to this company’s abuse and force it to abide by its promise to accept jurisdiction in Ecuador."

"We also wanted to thank Amazon Watch and the world community for their support in voting for Chevron to receive this highly appropriate dishonor," Piaguaje said.

In May 2014, a global protest against Chevron’s lawlessness and lack of respect for the environment took place in twenty countries on five continents. "No other major corporation has pursued such a destructive, vindictive and dangerous course in response to corporate accountability efforts," said Paz y Miño.

"For these reasons, Chevron is uniquely deserving of the lifetime award from the Public Eye," he added.

(A summary of the overwhelming evidence against Chevron relied on by the Ecuador court can be found here. A video explaining Chevron’s human rights violations in Ecuador can be seen here. A recent article in Rolling Stone explaining Chevron’s unethical litigation tactics can be read here. A profile in Vanity Fair of Ecuadorian lead lawyer Pablo Fajardo, the winner of a CNN Hero award, can be read here.)