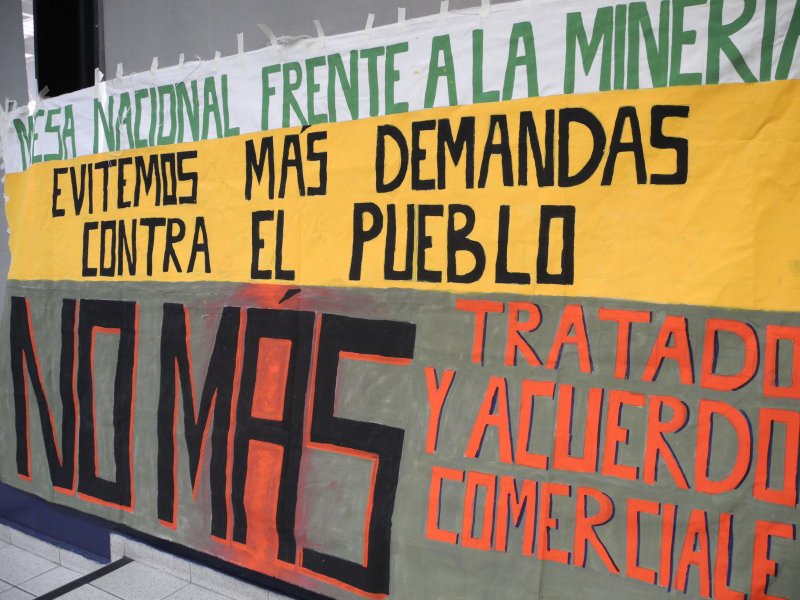 We stand in solidarity and in unity with the people of El Salvador in deciding their own future.

El Salvador is going through a multifaceted water crisis [1] that is projected to worsen [2]. The government has granted no mining licenses since 2008 in order to preserve water and the environment, supported by a broad consensus, backed by unions, political parties, the church and communities.

The Australian mining company OceanaGold Co and its subsidiary the Canadian Pacific Rim Mining Co, have lodged a $301 million lawsuit against the government of El Salvador because their application for a mining license was rejected on the basis of the massive environmental damage it would cause.

The facts are: • Since 2002 Pacific Rim Mining had explored an area close to the River Lempa, El Salvador’s main water source. During the exploration phase, the waters of River Lempa were reportedly polluted. • When the company sought to exploit a vein, the government did not grant them the permit. Among other problems, the company’s application for exploitation lacked certain requirements, including an environmental permit. [3] • The company did not seek redress in national courts. After some failed attempts to drag the government in international arbitration the corporation established a company in Nevada in order to make use of the US-Central America Free Trade Agreement (US-CAFTA). [4] • Pacific Rim originally sued the government for US$70 million in damages, but when the company was acquired by OceanaGold Co in 2013 the amount sought rose to US$301 million with the company claiming loss of expected profits from the exploitation that never took place.

The arbitration procedures to which El Salvador has been dragged are known as Investor to State Dispute Settlement (ISDS) and in the case of El Salvador the tribunal is convened by the World Bank International Centre for Settlement of Investment Disputes.

The drawbacks of ISDS tribunals are numerous and notorious. Undefined vague terms in bilateral treaties [5] have allowed foreign investors to challenge a range of policies including environmental regulation and mining permits, minimum wages, sovereign debt restructuring, energy measures, community and indigenous affairs, and even decisions of national courts. In practice, this allows corporations to sue governments whenever elected representatives put human rights and the public interest ahead of private investments.

To achieve globally declared public goals like the Millennium Development Goals and the Decent Work Agenda, governments must have powers to promote sustainability, inclusion and equality.

Foreign or national investors should have recourse to the same legal procedures as the rest of us.

The largest democratic global movement stands in solidarity with you, the people of El Salvador, against the unfair treatment of your valuable water resources and your future.

We call on the government to denounce all treaties establishing ISDS proceedings.

We call on the OceanaGold Co and the Pacific Rim Mining Co to withdraw their case.

[4] However, since 2012 the case is proceeding under a provision of El Salvador’s own domestic investment protection law instead of under CAFTA. The law was amended recently in order to exclude the provision that enabled Oceana to continue the case.