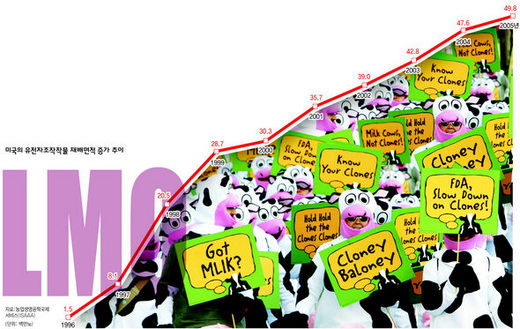 Increase in GMO crops area. A unit is 1 million hectare. (Source: The Hankyoreh)

The South Korean government pledged to ease quarantine rules on products containing genetically modified organisms (GMOs) under a free trade agreement with the United States struck on April 2, but while negotiations were underway on the deal, the government had denied it was discussing the topic.

In particular, the Korean government denied it linked the issue of the U.S. opening its textile market and Korea accepting U.S. GMOs, something that government documents obtained by the Hankyoreh says was indeed tied together during the talks.

In a series of talks last month on the South Korea-U.S. FTA, including the eighth round of ministerial meetings, both sides discussed GMOs, but the government explained that the issue had come up only in a separate "technical meeting" as GMOs were "not a part of the FTA agenda."

On April 5, the Hankyoreh reported, citing internal documents of the Korean delegation, that South Korea accepted the U.S. proposal that Washington would make a compromise in textile if Seoul eased quarantine regulations for GMOs.

On the same day, Kim Jong-hoon, South Korea’s chief negotiator in FTA talks with the U.S., told lawmakers that, "I know well about the textile negotiations. Under any steps of the talks, the U.S. didn’t present a demand over the GMO." And the following day, the Ministry of Commerce, Industry and Energy issued an official rebuttal statement to the Hankyoreh article, saying, "We did not receive a proposal from the U.S. that the U.S. would expand its textile market access on the condition we soften import rules on GMOs." The statement continues, "It’s hard to imagine for the U.S., which is sensitive to textile-market opening, to pursue the interests of another industry at the cost of the textile industry."

However, according to the South Korean government internal documents from March 31, named ’South Korea-U.S. FTA extended talks first-day negotiation plan,’ and obtained by the Hankyoreh, the government wrote that "Yesterday [March 30], the U.S. chief textile negotiator Scott Quesenberry expressed his stance that the U.S. could improve its textile tariff concession offer, depending on [South Korea’s] position over the GMO." Regarding the GMO discussions, the documents said, "The U.S. first offered six outstanding issues [regarding GMOs] on March 12" — the final day of the eighth round of negotiations — "and delivered a revised offer on March 30 after high-level meetings [on March 21]." The documents showed South Korea and the U.S. have in fact discussed GMOs, not only at technical meetings to be held separately from FTA talks, but also at the FTA talks themselves.

In addition, the documents said that "[after the U.S. presented a revised offer], the government delivered its final position to the U.S. as of 1:00 a.m. on March 31." "On the core issue of No. 5, both sides will pursue a separate discussion on practical matters. On other issues, both sides find a common ground in principle and push to agree on specifics." The "No.5 issue" refers to the U.S. side’s request to South Korea to sign a GMO deal before South Korea’s regulations on GMOs go into effect.