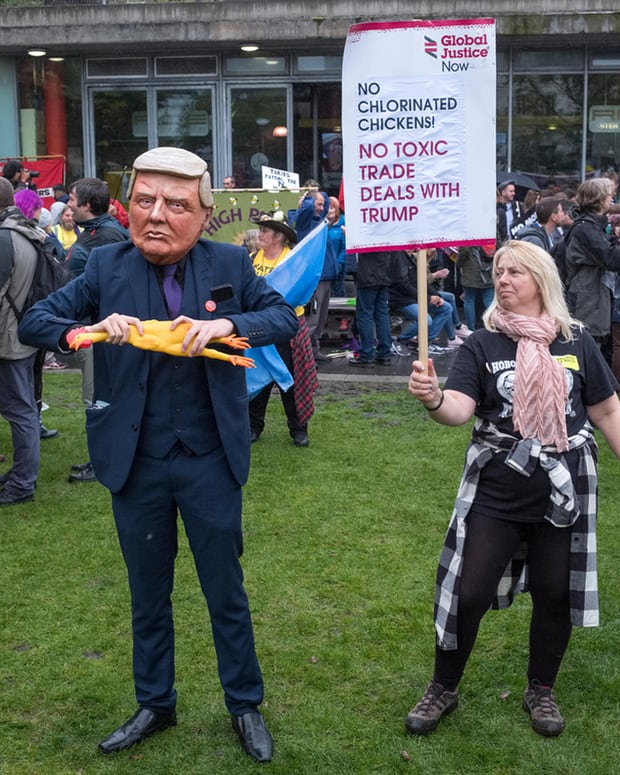 Most people are worried about meat quality standards being lowered in a future trade deal with the United States, a new survey suggests.

The union said its poll also showed that just over half of people believe government regulations should be tightened following the UK’s departure from the EU.

Dave Prentis, the general secretary of Unison, said: "Public safety and confidence in the food on our plates is at stake as this government puts everything on the line for a trade deal.

"Cosying up to the US president shouldn’t mean dropping standards by accepting meat with poor hygiene, which has been given a blast of bleach or acid to gloss over its murky past.

"Consumers care how their food is prepared, that’s why they want independent checks. They’ll have no faith if the industry is virtually left to look after itself.

"The government must fund proper inspections rather than put lives at risk or undermine trust in food safety.

"Brexit should mean the UK’s current high standards are maintained or improved, not the introduction of bargain-basement, third-rate standards."

Sue Davies, of consumer group Which?, said: "Our research has shown consumers value the UK’s high food standards and most people believe food produced to a lower standard should not be available in this country.

"It is vital that the nation’s health is not used as a bargaining chip in negotiations for future trade deals, so the Government must legislate to prevent imports produced to lower standards, such as chlorinated chicken and hormone-treated beef, from entering the UK.

"The opportunity must be taken to use trade deals to build upon the UK’s rights and standards by pursuing an ambitious trade agenda that sets the gold standard globally in delivering for consumers."

A government spokeswoman said: "We remain firmly committed to upholding our high environmental, food safety and animal welfare standards, now we are outside the EU.

"The government will stand firm in trade negotiations to ensure our future trade deals live up to the values of farmers and consumers across the UK."