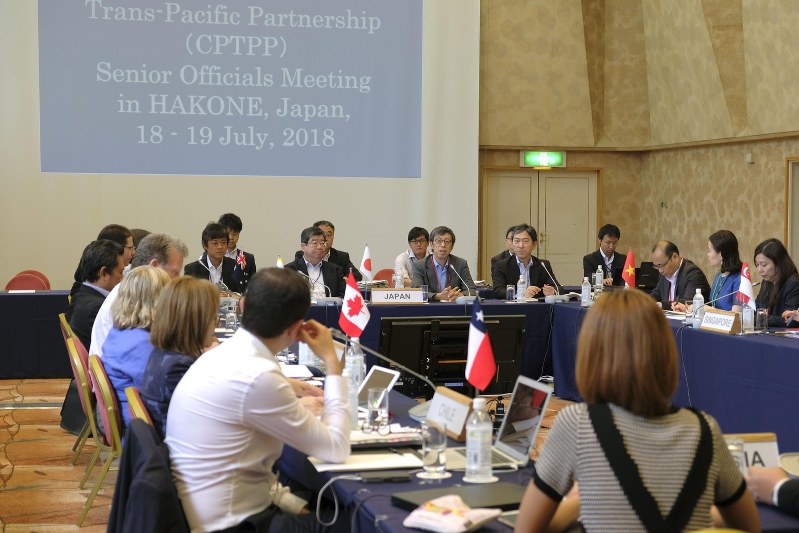 TPP countries to start accession talks for new members in 2019

During a two-day meeting from Wednesday in the hot-spring resort of Hakone near Tokyo, the negotiators checked each member’s progress toward the completion of domestic procedures to ratify the trade accord and discussed the future expansion of the TPP framework, currently covering around 13 percent of the world’s economy.

Thailand, Indonesia, Columbia, South Korea and Taiwan are seen as willing to join the revised TPP signed in March, formally known as the Comprehensive and Progressive Agreement for Trans-Pacific Partnership.

Faced with growing concerns about the rise of protectionism and fears of a trade war, the TPP countries have been seeking solidarity in creating a wider free trade zone in the Asia-Pacific, despite the abrupt U.S. pullout from the framework.

"We will likely need to start procedures soon after the pact takes effect," Kazuhisa Shibuya, the senior Japanese government official in charge of the TPP, told reporters after the meeting, in reference to the planned accession talks.

He added that chief TPP negotiators will likely meet again by the end of this year.

For discussions about the expanded trade area, arrangements are expected to be made among the existing member countries to hold the first meeting of a so-called TPP committee in Japan.

The pact will take effect 60 days after at least six countries complete their domestic procedures. Japan, Mexico and Singapore have already ended their ratification processes, with three more countries — Australia, New Zealand and Vietnam — likely to follow suit by the end of the year.

In addition to the possible newcomers, Britain, which has decided to leave the European Union, has also shown interest as Trade Minister Liam Fox said Wednesday the country will consult with the public over its potential bid to participate in the TPP.

New members interested in taking part in the TPP will likely be required to accept what has already been negotiated by the existing 11 countries in areas such as intellectual property.

Japan is promoting free trade through both multilateral and bilateral agreements. Earlier in the week, Tokyo signed a free trade accord with the European Union for one of the world’s largest bilateral FTAs.

Negotiations are currently under way for a more diverse free trade bloc that also includes China and India, under the Regional Comprehensive Economic Partnership.