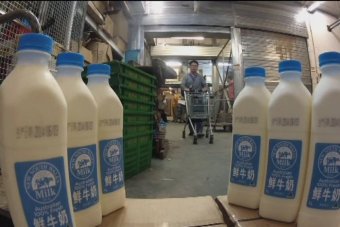 Trade Minister says he’ll now work on a deal with India, after signing of FTA with China

Within an hour of finalising a free trade deal with China, the Federal Trade Minister said he hoped to complete an FTA with India in the next year.

As expected, the China Free Trade agreement will see tariffs on dairy, beef and its by-products, horticulture, sheep meat, wine, sorghum, barley, live cattle and a wide range of seafood phased out. Tariffs on pulses, oats, cotton seeds and malt and wheat gluten will also be eliminated, as will those on a range of processed foods including fruit juice and honey.

As predicted, some sectors have missed out, with the FTA providing no tariff reductions for rice, sugar, cotton, wheat, canola and maize.

"Those products have never been part of any agreement that China has done, becasue of the sensitivity in some of their rural areas, and they pushed and pushed against any negotiation and I said that I can’t, I won’t, do anything on state-owned enterprises in pushing the threshold until (they) make some movement on those products," he said.

Mr Robb claims the talks regarding sectors like rice and sugar reached a ’stalemate’, and the zero threshold for state-owned enterprises was a compromise.

"They said, ’we’ll not insist on something happening on state-owned enterprises if you won’t do anything on those products’," he said.

"I said I’ll accept that so we can get on with 98 per cent of the agreement, but only if we can put a clause in there to review those products in three years’ time. So that’s what will happen."

"I have got a team heading off to India within the next 10 days for the first stage of negotiations and when I went with the Prime Minister to meet the new Prime Minister (Narendra) Modi in India a few weeks ago, in a private meeting we agreed that we would aim to have an agreement finished within 12 months," he said.

"So that’s a big job because there’s a long way to go with that one."

The National Farmers’ Federation says the China FTA is a big win for agriculture. President Brent Finlay says he breathed a ’sigh of relief’ as he read through the final agreement.

"Everyone’s looking forward to it and everyone’s a little bit nervous, because you never know what’s going to happen at the wedding and we know sometimes the wedding doesn’t actually happen becasue something goes wrong.

"And now it’s a sense of relief and we need to celebrate what has been done."

Mr Robb says the deal is equal to that signed between New Zealand and China in 2008 and, for the dairy sector, it’s better. He expects the deal to come into effect in four to five months time.

He and the Chinese Commerce Minister Gao Hucheng signed a Declaration of Intent on Monday, undertaking to prepare the legal texts in both languages for signature.

Tariffs on 93 per cent of export goods will be phased out within four years. Dairy deal goes one better than NZ

Most Australian dairy products won’t be subjected to the protective safeguards which currently apply to New Zealand dairy exports to China.

The safeguards ensure that once a quota is reached, tariffs once again apply. The only product the safeguards are expected to apply to is whole milk powder.

The dairy industry has been lobbying hard for a China free trade deal that’s as good as, if not better, than New Zealand’s.

"In the swings and roundabouts of the whole thing, with respect to looking at tariffs and safeguards, we believe that we got we’ve asked for," he said.

Mr Campbell says that with respect to protective safeguards, Australia has a better deal than New Zealand. But he points out the agreement isn’t superior in every respect.

"With respect to some of the tariffs, I think the longevity of them is still quite long, but overall, we’re very pleased."

Sheep and goat meat 23 per cent tariff phased out over eight years Exports to China currently worth $385 million a year, and sorghum worth $246 million

Skins, hides and leather Two-to-seven-year phasing out of up to 14 per cent in tariffs Exports currently worth $896 million

Mining Tariffs on minerals commodities including zinc, nickel, copper and uranium eliminated Immediate removal of 3 per cent coking coal tariff and 6 per cent tariff on thermal coal should be phased out within two years

No deal on sugar or rice exports

The regional head of agribusiness for National Australia Bank Asia, Patrick Vizzone, agrees that the deal will equal New Zealand’s, but he points out that safeguards haven’t worried exporters there.

"If you think about when the FTA came into force in 2008 for New Zealand, 10 per cent of New Zealand’s exports went to China," he explained.

"As of last year, that was 45 per cent. So clearly the safeguards have not played a major role and trade between New Zealand and China has blossomed during that time."

Whole milk powder exports will be tariff-free within four years.

Beef tariffs of between 12 and 25 per cent will be phased out over nine years. Australia’s beef exports to China are currently worth $722 million.

Meanwhile, the 23 percent tariff on Australia’s $385 million worth of sheep and goat meat exports will be phased out over eight years.

The grains industry is also understood to win from the deal, with an immediate removal of the 3 per cent tariff on barley. Those exports are currently worth more than half a billion dollars a year.

Live cattle exports, which are worth $136 million, will see 5 per cent tariffs phased out over that period too.

The $896 million market for skins, hides and leather will be boosted by a two to seven year phasing out of up to 14 per cent in tariffs.

Horticulture is another big winner, with all tariffs to be eliminated within four years. The same will apply to a wide range of seafood, including abalone, rock lobsters, prawns, scallops and oysters.

Meanwhile, the 14 per cent tariff on Australia’s $217 million worth of wine exports will go within four years.

Initially, at least, there won’t be any deal on sugar or rice exports.

Mr Vizzone says that, of all sectors, meat is one of the most important when it comes to future trade with China because of its reputation for being ’food-safe’.

"One of the most fertile spaces is protein and beef in particular, he said.

"China already has some of the highest meat to calorie consumptions in the world and part of the reason for that is pork.

"Pork is way more calorific than chicken or beef. It’s the move to higher value or safer protein, and Australian beef is very high on the list in that regard."

The FTA is also likely to please most of Australia’s mining and resources industry.

All remaining tariffs on minerals commodities such as zinc, nickel, copper and uranium will be eliminated. The 3 per cent coking coal tariff is expected to be removed immediately and the 6 per cent tariff on thermal coal should be phased out within two years.

Japan has a heavily protected agricultural market and Australia is the first significant agricultural producer to conclude a meaningful deal. Key results from the JAEPA include:

The United States is Australia’s major competitor in South Korea, and already has a free trade agreement in place. Korea is Australia’s fifth-largest market for agricultural exports. Key results from KAFTA include: