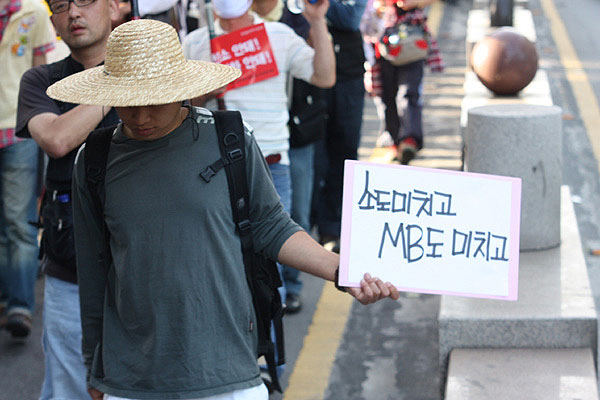 SEOUL, May 31 (Reuters) — South Korean students, parents with toddlers in tow, and union members took to the streets on Saturday in a massive protest against a government decision to resume imports of U.S. beef that they see as dangerous.

The organisers of the candle-lit vigil said 100,000 people were at the rally that stopped traffic on the 16-lane central Seoul main thoroughfare, after more than a week of daily protests against President Lee Myung-bak.

South Korea, once the third-largest importer of U.S. beef until a 2003 outbreak of mad cow disease in the United States, said it would start quarantine inspections of U.S. beef, a move that opens its market fully for the first time in four years.

Lee, who came to power with the largest margin of victory in history, has been caught by surprise by the protests and his popularity has plummeted over the decision to import U.S. beef.

Critics said the decision, announced during his visit to the United States in April and just before he met President George W. Bush, was a move to please Washington.

College student Ju Ha-na, 24, who took part in a head-shaving ceremony in protest with 19 others, said the people at the protest were not only alarmed by U.S. beef.

"Not just the beef deal, but the Lee Myung-bak government’s policies are anti-working people and are not right," she said.

Several hundred people have been detained from the daily protests, but police have so far refrained from using full force to contain the crowd. Officials again ordered restraint on Saturday.

Chung Hye-ran, 38, at the downtown rally, said she did not like being ignored. "I came out here as a mother and as a member of the public to protect the health of my child and that of the people of this country."

Under the deal to reopen its market, Seoul agreed with Washington to accept all cuts of beef from cattle of all ages, while other U.S. trading partners such as Japan still will not do so because of concerns over mad cow disease.

President Lee last week apologised for ignoring public health concerns and promised to restore the ban if there was a fresh outbreak of mad cow disease.

Critics said the apology came too late and did not adequately address public concern. 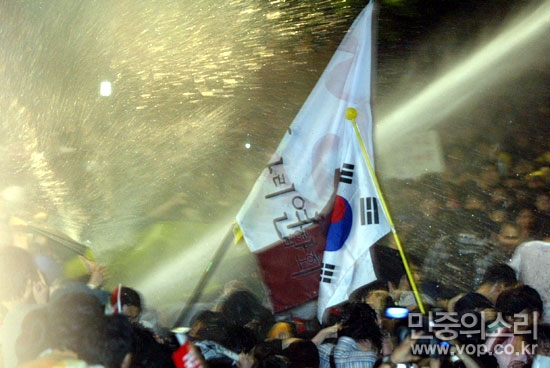