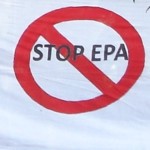 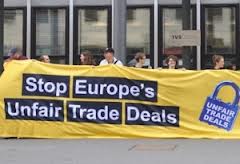 Why ’free trade’ hits Pacific people (PMC)
1-Sep-2013 AUT
For Gary Juffa — the Governor of Papua New Guinea’s Oro province and one of the region’s most outspoken critics of free trade — neoliberalism is a hard pill to swallow.
Europe hits back in war of words with the Pacific over trade
18-Jun-2013 Radio Australia
Plans for a comprehensive Economic Partnership Agreement are in jeopardy after the Pacific Island nations accused Europe of failing to respond to their requests and threatened to pull-out if Europe is unable to meet their deadline of the end of this year.

Rejecting free trade requires new forms of regionalism
13-Jun-2013 Islands Business
Papua New Guinea’s trade Minister, Richard Maru, recently set a cat amongst the pigeons by saying that PNG was not interested in the regional trade negotiations known as PACER-Plus. “We can’t export our taro there, they won’t accept our greens...There’s nothing to be gained from a trade agreement at the moment. ‘We cannot justify the huge amount of resources we expend on such negotiations. They are a complete waste of time.”
0 | 20 | 40 | 60 | 80 | 100 | 120 | 140 | 160
Subscribe to bilaterals.org weekly