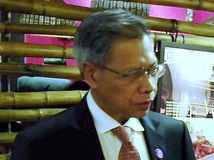 Malaysia is hopeful of concluding RCEP negotiations In 2015
16-Jan-2015 Bernama
Malaysia is hopeful that negotiations for the Regional Comprehensive Economic Partnership (RCEP) can be concluded by year-end, International Trade and Industry Minister Datuk Seri Mustapa Mohamed said.
Dhaka, KL may ink FTA deal by June next year
15-Jan-2015 Financial Express
Malaysia’s International Trade and Industry Minister Mustapa Mohamed has expressed the hope that Dhaka and Kuala Lumpur (KL) would sign a Free Trade Agreement between Malaysia and Bangladesh by middle of next year
0 | ... | 80 | 100 | 120 | 140 | 160 | 180 | 200 | 220 | 240 | ... | 700