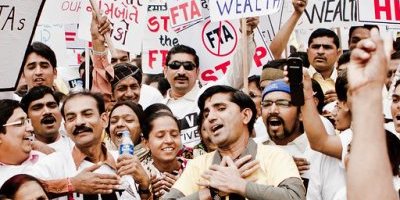 The Indian government has been active in seeking out bilateral trade agreements, with other so-called developing countries and the developed world as well.

India has signed limited FTAs with Sri Lanka (1998) and Thailand (2003) plus a number of preferential trade agreements (tariff concession schemes) with countries/blocs such as Afghanistan, Nepal, Chile and Mercosur.

At the end of June 2005, the government signed a Comprehensive Economic Cooperation Agreement with Singapore, what many consider India’s first "comprehensive" FTA. India also signed FTAs with ASEAN (2009), Korea (2009) and Japan (2010), which were later criticised for widening India’s trade deficit with the three trade partners. These deals were followed by another one signed with Malaysia (2011). India expects to upgrade its pact with Sri Lanka into a similar type of Comprehensive Economic Partnership Agreement.

In 2007-2008, India commenced FTA talks with European powerhouses EFTA (European Free Trade Area) and the EU (European Union), but in 2013 talks stalled with the Union, over issues such as market access given by India to automobiles and alcohol from the EU, and Delhi’s refusal to open up its public procurement and financial services sector like banking, insurance and e-commerce.

In 2010, it began talks with New Zealand and in 2011 with Australia, but they were put on hold in 2013 when India started negotiating the mega-regional RCEP (Regional Comprehensive Economic Partnership) agreement with the 10 ASEAN nations, Australia, China, Japan, New Zealand and South Korea. In November 2019, India pulled out of the RCEP negotiations, due to concerns over trade deficits, notably with China, and countries’ reluctance to open markets to Indian services and investments. RCEP has generated a lot of controversy and resistance at home, mostly from farmers, unions, dairy cooperatives and patients’ groups that were concerned about the impacts on medicines.

India dropping out of RCEP has led the country to renew its interest in bilateral talks. The Australia and New Zealand FTAs are in the process of being revived. India is looking into ways to restart negotiations with the EU and speed up those with EFTA. An India-US FTA has been on the table as well, which has angered farmers and unions at home because it would hurt local agriculture.

Apart from these deals, bilateral trade negotiations are going on with Bangladesh, Canada, Colombia, the GCC (Gulf Cooperation Council), Iran, Israel, the Russia-led Eurasia Economic Union, Uruguay, Venezuela, and Mauritius, the last of which would provide a foothold into Africa through the African Continental Free Trade Area. Further down the line, the government is in various stages of considering talks with Cambodia, China, Costa Rica, Egypt, Hong Kong, Indonesia, Korea, the Philippines, SACU (Southern African Customs Union) and the United Kingdom.

India has also signed 86 bilateral investment treaties (BITs) with a wide array of countries, even though only 13 of them are still in force. Following a few controversial investor-state disputes (ISDS), India terminated most of its BITs and released a revised model BIT in December 2015, which was to serve as a basis for future negotiations and should replace existing treaties. This new model tries to achieve more balance by, for instance, requiring investors to use local courts before turning to international arbitration and leaving out the highly contested provision on “fair and equitable treatment”. However, it is not clear how much the government is using it as a red line, rather than a starting point for negotiations.

India FTAs & women
In India-UK trade deal, focus on what is acceptable to both countries: Piyush Goyal
24-Jan-2023 Money Control
Commerce and Industry Minister Piyush Goyal has said that in the talks for the proposed free trade agreement between India and the UK, the focus is on what is acceptable to both countries and not allow sensitive issues to scuttle the discussions.
India FTA can be clinched this year, but no more visa offers: UK trade minister
23-Jan-2023 India Today
The India-UK free trade agreement is expected to be clinched this year but it won’t involve any boost of free movement visa offers for Indians.
India, UK reaffirm commitment to early conclusion of FTA
17-Jan-2023 Hindustan Times
India and the UK had earlier unveiled plans to conclude the FTA by October 2022 but the trade deal ran into problems because of British home secretary Suella Braverman’s controversial comments that an agreement could lead to increased migration from India.
Switzerland hopes to conclude free-trade negotiations with India in 2023
10-Jan-2023 LatestLY
The negotiations on the Free Trade Agreement between India and Switzerland will resume in February this year when the Swiss trade secretary will be on a visit to New Delhi.
India, Australia aim to finish trade talks by September
20-Dec-2022 Live Mint
With the interim trade deal between India and Australia set to come into force on 28 December, the two countries are aiming to complete negotiations for the Comprehensive Economic Cooperation Agreement (CECA) agreement by September next year.
Fantasy Sports Industry Outlook for 2022-2023
16-Dec-2022
Assessing India’s free trade agreements
12-Dec-2022 Madhyam
The unambiguous conclusion that can be arrived at based on the analysis provided in this paper is that these FTAs have not been beneficial to India.
Israel Ambassador Naor Gilon says, ’India-Israel to finalise FTA soon’
9-Dec-2022 Republic World
Israel’s Ambassador to India, Naor Gilon, indicated that Israel is planning to kick start dialogue regarding the India-Israel Free Trade Agreement (FTA) negotiations soon.
Sri Lanka to resume negotiations on stalled trade agreement with India
9-Dec-2022 The Hindu
Sri Lanka will soon resume talks with India on the stalled Economic and Technological Cooperation Agreement (ETCA), authorities said, as Colombo looks to trade pacts and foreign direct investments to rebuild its crisis-hit economy.
Indo-Australia trade agreement to come into force from Dec 29; to give duty free access to a number of goods
6-Dec-2022 Deccan Herald
The free trade agreement between India and Australia will come into force from December 29 giving duty free access to thousands of domestic goods in that market, which will help in almost doubling the bilateral commerce to $45-50 billion in around five years.
0 | 10 | 20 | 30 | 40 | 50 | 60 | 70 | 80 | ... | 1100
Subscribe to bilaterals.org weekly