Trade pact with Gulf Cooperation Council on the cards
19-Jan-2011 The Star
The framework of the cooperation agreement between Malaysia and the Gulf Cooperation Council countries has been completed and the next step is to sign the free trade agreement, according to Minister of International Trade and Industry Datuk Seri Mustapa Mohamed.
Put a hold on FTAs unfavourable to us
20-Dec-2010 Malaysiakini
The Consumers Association of Penang is deeply concerned about the implications FTAs with the US (via the TPP) and the EU might have on various aspects of Malaysia’s development.
Put a hold on FTAs unfavourable to us
15-Dec-2010
The Malaysian government last week negotiated free trade agreements (FTAs) with the United States of America (via the Trans-Pacific Partnership Agreement or TPP) and the European Union (EU). 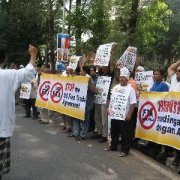 NGOs submit memo to govt, call for halt to FTAs
3-Dec-2010 Third World Network
A group of NGOs representing the Anti-FTA Coalition gathered on Thursday, 3 Dec 2010 at the Malaysian Ministry of International Trade and Industry to hand over a memorandum addressed to the Minister to register their concerns over Malaysia’s plan to enter into negotiations with the EU (bilateral) as well as the US (via the Trans-Pacific Partnership) which will take place next week in Belgium and New Zealand, respectively.
Matrade plans 113 trade promotion activities in 2011
2-Dec-2010
Malaysia External Trade Development Corp (Matrade) has lined up 113 trade promotion activities under its 2011 Work Programme to further expand exports.
Malaysia signs FTA with Chile, its first with Latin America
13-Nov-2010 Bernama
Malaysia and Chile signed the Malaysia-Chile Free Trade Agreement (MCFTA) today, marking Malaysia’s first bilateral FTA with a Latin American country.
KL and Canberra to sign free trade agreement by next year
2-Nov-2010 The Star
Malaysia and Australia have agreed to sign a Free Trade Agreement (FTA) by next year to further improve trade and investment opportunities between the two countries.
FTA with Australia possible by mid-2011
29-Oct-2010 The Star
The free trade agreement (FTA) talks between Australia and Malaysia are likely to be concluded by mid-2011.
Malaysia to get greater access to india for palm oil, cocoa in trade pact
19-Oct-2010 Bloomberg
Malaysia said it expects to conclude talks with India on a free-trade agreement next week that should see it obtain greater access for products including cocoa and palm oil as well as more stringent anti-dumping provisions.
Aussie firms urged to get ready for opportunities from FTA
30-Aug-2010 Bernama
Australian companies and investors have been advised to get ready to grab business opportunities in Malaysia as the free trade agreement between the two countries is expected to be signed later this year.
0 | ... | 30 | 40 | 50 | 60 | 70 | 80 | 90 | 100 | 110 | ... | 180