Korea, Vietnam agree to work more closely on FTA
26-Nov-2013
The Ministry of Trade, Industry and Energy announced on November 24 that it held the fourth bilateral joint committee meeting with the Vietnamese government in Can Tho City. The conclusion of the free trade agreement between Korea and Vietnam is expected to speed up.

Israel’s argiculture seeds taking root in Vietnam
26-Nov-2013 Israel21C
An Israeli-Vietnamese agriculture research and development fund — and a free-trade agreement between the two countries — may be established soon, following a series of high-level visits.

EU, Vietnam expect to sign FTA pact in 2014
14-Nov-2013 Xinhua
The European Union and Vietnam are working to conclude negotiations on a free trade agreement by late 2014
Putin expects Vietnam and CU to conclude agreement on FTA
11-Nov-2013
Russian President Vladimir Putin set a task of doubling goods turnover in trade with Vietnam within six years. This was stated by the Russian Head of State in an article published by Vietnamese media on Monday ahead of Putin’s visit to Hanoi on November 12.
Vietnam, Israel Looking towards Bilateral Free Trade Agreement
3-Nov-2013
Vietnam and Israel would soon discuss a possible bilateral free trade agreement to accelerate two-way trade in the future.

Chinese investors flock to Vietnam to wait for TPP
19-Sep-2013 VNN
Three years ago, Chinese businessmen, when asked if they would make investment in Vietnam, all said “no.” However, they have changed their mind.

Vietnam and FTA negotiations: NGOs urge the EU to carry out a human rights impact assessment
2-May-2013 FIDH
The International Federation for Human Rights (FIDH) and its member organisation, the Vietnam Committee on Human Rights (VCHR), would like to ask the European Union to conduct an impact assessment that adequately encompasses the human rights situation before continuing the negotiations of the Free Trade Agreement launched in March 2013 with Vietnam.

FTA with EU will pave way for more exports
5-Apr-2013 FIS
The free trade agreement between Vietnam and the European Union is expected to open many doors for Vietnamese seafood to enter the EU, according to the Vietnam Association of Seafood Exporters and Producers
Vietnam, Customs Union kick off FTA talks
29-Mar-2013
Prime Minister Nguyen Tan Dung and Chairman of the Eurasian Economic Commission’s Board Viktor Borisovich Khristenko, on March 28, officially launched negotiations for a free trade agreement (FTA) between Vietnam and the Customs Union of Russia, Belarus and Kazakhstan.
EU-Vietnam weigh FTA
21-Mar-2013 Asia Times Online
While both sides agree an FTA would on the whole be mutually beneficial, negotiations will likely be complicated by the potential socio-economic impacts a pact would have on Vietnam’s fragile transitional economy. 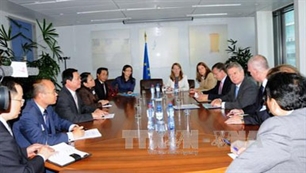 Vietnam, EU look to conclude FTA negotiations
8-Mar-2013 VNA
Prime Minister Nguyen Tan Dung wants to speed up negotiations on the free trade agreement between Vietnam and the EU.
Vietnam’s president hopes for swift conclusion of free trade talks with S. Korea
21-Dec-2012
Vietnamese President Truong Tan Sang voiced hope for a swift conclusion of negotiations with South Korea on forging a bilateral free trade deal but noted that an agreement should take each other’s interests into consideration.
South Korea-Vietnam to sign free trade agreement
29-Nov-2012
On November 27, a conference relating to the ongoing Free Trade Agreement (FTA) negotiations between Vietnam and the Republic of Korea was held in Ho Chi Minh City.
Ukrainian PM urges efforts to accelerate FTA talks with Vietnam
23-Nov-2012
Ukrainian Prime Minister Mykola Azarov Wednesday urged to speed up Free Trade Area (FTA) negotiations with Vietnam.
Vietnam, Russia to speed up trade pact talks: report
22-Oct-2012 Thanh Nien News
Vietnamese and Russian officials have said they will push harder for a free trade agreement as the countries aim to more than double their trade value in the next three years.
VN starts FTA talks with EU
4-Oct-2012 Viet Nam News
The first negotiations on a bilateral Free Trade Agreement between Viet Nam and the European Union are scheduled to open this month.
Korea, Vietnam Hold 1st Round of FTA Talks
3-Sep-2012
The first round of free trade agreement talks between Vietnam and Korea kicked off on Monday in Seoul. During the talks that will continue until Tuesday, the two countries will discuss how to proceed with the negotiations. Seoul’s foreign ministry expects the bilateral trade pact to enhance an existing free trade agreement with the 10-member Association of Southeast Asian Nations that took effect in 2007.
0 | ... | 140 | 160 | 180 | 200 | 220 | 240 | 260 | 280 | 300 | ... | 360
Subscribe to bilaterals.org weekly