Food issues will not block EU-US trade deal: German minister
12-Jan-2015 Reuters
Germany’s farm minister Christian Schmidt says the United States is likely to back down on its opposition to the compulsory labeling of products containing or fed by GMOs.

On the road to Asia: why Germany and the Eurozone want a trade deal with Australia
24-Dec-2014 The Conversation
The post-G20 initiative could serve as a precursor for negotiations on a European-Pacific trade and investment agreement, writes Harald Sander.

Free flight for EU leaders not needed, German official says
7-Oct-2014 CBC
Prime Minister Stephen Harper’s offer of a free ride home for visiting European leaders — at a cost of more than $300,000 — is raising eyebrows on both sides of the Atlantic. 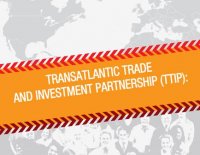 Germany seeks to limit investor protection to save trade deal
5-Aug-2014 FT
The German government expects the Canadian deal will be agreed at an EU-Canada summit in late September but believes that some changes could be ultimately needed in the final wording.

How German opposition could sink a major Canadian trade pact
20-Jun-2014 The Tyee
After many delays, the CETA text could be finalized by negotiators within weeks. But in Europe, a messy fight over its ratification is just beginning, reports Canadian Centre for Policy Alternative’s trade policy analyst Scott Sinclair.

Pirate party: Zombie walk against TTIP in Berlin
21-Apr-2014 Revolution News
German Pirate Party invited everyone for a Zombie Walk to protest against the draft contract of the secretively crafted transatlantic trade agreement (TTIP) in Berlin on Easter Saturday.
0 | 20 | 40 | 60 | 80 | 100 | 120
Subscribe to bilaterals.org weekly